The violent death of the Sixties dream

Fifty years after the Manson murders, James Riley explores the infamy and enduring popularity of 1969 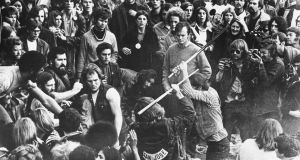 In August 1969 members of the Family, a group led by the criminal-cum-musician Charles Manson, killed the actress Sharon Tate and six others in a murderous house-breaking spree.

High on a potent brew of acid philosophy, cult psychology and misinterpreted Beatles lyrics, the Family were in pursuit of a project they called Helter Skelter. The murders, they hoped, would instigate a race war which would allow them to retreat to a cave in Death Valley where they could live out the end times.

Soon after, on December 6th, 1969, the Rolling Stones finished their North American tour with a free festival at the Altamont Speedway in Livermore, California. With no proper planning the band paid the local Hells Angels in beer to police a crowd of more than 300,000 people. Before the event was over one man had drowned in a drainage pit, two more had been killed in an on-site hit and run and, later, as the band performed, a young black man, Meredith Hunter, was killed by the Hells Angels in full view of the stage.

For the writer and essayist Joan Didion, the Manson murders marked the “precise moment” when “the Sixties came to an end” because they utterly exploded the myth of harmony and togetherness that the Hippie culture had propagated. For the gonzo journalist Hunter S Thompson, Altamont was where the “sharks finally came home to roost”: the chaos showed up all the violence and false promises inherent in the counterculture.

Whatever utopian dreams Woodstock had offered, the blasted heath of Altamont blew them all away. It revealed this new culture of the young to be at best incompetent and at worst cannibalistic. Put them in a field together and they’ll just turn on each other and replicate all the worst elements of the “straight” society they’re trying to change.

Didion and Thompson were not isolated voices. Throughout 1969 and into 1970, regular articles appeared in Rolling Stone, Esquire, Tuesday’s Child and International Times about epidemic levels of drug addiction, street violence and the growth of black magic cults.

Together they read like apocalyptic dispatches perfectly soundtracked by grim albums like Volunteers (1969) by Jefferson Airplane and Let it Bleed (1969) by the Rolling Stones. In depicting Altamont and the Manson murders, films like Gimme Shelter (1970) by David Maysles, Albert Maysles and Charlotte Zwerin and The Other Side of Madness (1971) by Frank Howard clearly echoed this atmosphere of crisis and generational failure.

Meanwhile Dennis Hopper’s Easy Rider (1969), with its classic line “We blew it”, helped to further define a zeitgeist of catastrophe at the turn of the decade. Seen in this company it’s no surprise that Roman Polanski had Rosemary’s Baby (1968) end with the birth of the antichrist. It seems that as 1969 progressed, many writers and artists began to lament not just the end of the decade but the end of “the sixties”: the disastrous closure of a halcyon period.

Of course, this narrative of collapse is only one story of the Sixties. Look again and the decade that gave rise to 1964 Civil Rights Act and which saw the legalisation of the contraceptive pill in 1967 reveals itself as a period of great social and political advance. 1969 was no exception. A glance at America’s experience of the year finds the twin triumphs of the Apollo 11 Moon landing and the Woodstock Festival as well as the inauguration of the modern gay rights movement from the tinderbox of the Stonewall riots.

In Britain, 1969 saw continued economic growth, high employment and record levels of home ownership. In Germany, the Bonn Agreement saw big steps made towards environmental protection and following on from the “events” in Paris in May 1968, the wave of strikes during Turin’s “hot autumn” placed the rights of Italian migrant works centre stage. Protest, class consciousness and a widespread questioning of the establishment: this was the situation at the end of the decade. Things were by no means perfect but as 1969 became 1970, the world did not come to an end.

This has not prevented the emergence of an entire culture industry which continues to emphasise the dark side of the 1969. Case in point, Quentin Tarantino’s new film Once Upon a Time in Hollywood, a paean to the late-60s featuring Margot Robbie as Sharon Tate. Coming hot on the heels of the Moon landing anniversary, the film shows that Manson still exerts a pull on the popular imagination.

There is much to celebrate about the 1960s and there is much to criticise. As for its dark side, the violence that appears to flourish in its final days was there from the start: the 1960s were shot through with nuclear anxiety, political assassination and global war.

If, then, the historical reality of the 1960s is so different to the myth of the “Sixties” and its purported “end” why does this image of a tailspin decade continue to resonate? The answer lies with the strange power of nostalgia.

The Sixties so often work as a kind of psychic refuge: we look back in the hope of re-experiencing a period far removed from the tribulations of “today”. Back then, we tell ourselves when watching the same Beatles clip for the umpteenth time, things were so much better. Remembering the Sixties as glory days that came to a tragic end is part of this process. It helps to furnish the period with a sense of exceptionalism. What else could we expect from such a supernova of a decade than a spectacular crash? They must go out with a bang, because otherwise we’re left with the true horror: the reality that people grew up, things moved on and it all just faded away.
James Riley is the author of The Bad Trip: Dark Omens, New Worlds and the End of the Sixties (Icon Books)