‘Books are a lever to the mind’: Lilliput Press’s Antony Farrell on 35 years in publishing 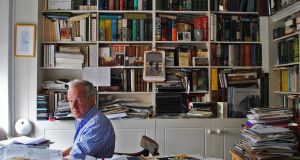 Antony in his current office in 2013

When I left university in 1972 there was no work in Dublin so, like many others, I went to London. There, I was an editor on a partwork called Green Fingers and a literary magazine called ADAM (Arts, Drama, Architecture and Music), edited by a gloriously eccentric Francophile- Romanian-in-exile named Miron Grindea. I came back from London after eight years to get married and raise my children at home in Westmeath. I had a vague blueprint for Lilliput in view but I initially worked as a freelance editor for a small number of presses in Dublin. Publishing was very much a cottage industry at the time. I took on work from Dolmen, Irish Academic Press, Wolfhound and O’Brien Press, all run by men, as it happened: Liam Miller, Michael Adams, Séamus Cashman and Michael O’Brien, each charismatic and engaged – characteristics publishing requires.

In 1984 I set up The Lilliput Press, named after the townland that verges on Lough Ennell where Jonathan Swift spent occasional summers. I was a reader at Wolfhound Press with Frank McGuinness when I came across a random submission of essays by Hubert Butler which I was very excited by. I wrote a positive report but Cashman didn’t want to publish them, so I suggested taking on the work and he gave me his blessing. I spent a year putting together Butler’s first volume of essays, Escape From the Anthill – this created a gold standard of writing we have tried to follow ever since. As a writer, Butler refined the essay form, which has now come back into fashion with our era’s shorter attention spans. He was first published at the age of 84 and his work resonates with everybody who reads him.

Through my first author, Mullingar novelist and photographer Leo Daly, I met Tim Robinson, a nature writer and geographer working in the west of Ireland. I published a pamphlet called Setting Foot on the Shores of Connemara, which became the title essay for a collection. I went on to publish Stones of Aran in two volumes, his masterpiece, now a classic of its kind. Taking on two major writers within the first year of establishing Lilliput set us on the road. My third find was George O’Brien, who sent me a memoir called The Village of Longing about growing up in Lismore during the 1950s; this again was a literary masterpiece. In all three cases - George O’Brien, Tim Robinson and Hubert Butler - we sold rights on to Penguin in the UK. Starting off with high-quality authors set a pace for the types of books we wanted to develop and publish.

We began publishing three or four books a year and expanded to around 10 during the early 1990s. Lilliput’s freelance editors, managers and interns have always been central to the collaborative process. When we began receiving Arts Council funding in the 90s it enabled us to build the list and to take more risks, particularly with fiction, which helped to develop the Press. The Arts Council continues to give us much-needed generous support. Setting up a press is both a privilege and a challenge. The rule of thumb is that one book in eight or 10 makes money, so it’s financially risky but incredibly enjoyable.

Over our 35-year span we’ve published over 600 titles, with half the list still in print. With fiction, we try to publish authors, not books, so our goal is to publish multiple titles by the people we take on. We have been the first publisher of many talented writers including Donal Ryan, Rob Doyle, Elske Rahill, Adrian Duncan and our most recent discovery, Gillies Macbain, whose memoir The Last Footman will be launched in October. We are also proud of attracting established authors such as Emer Martin, whose startling novel The Cruelty Men was shortlisted for the Kerry Group Irish Novel of the Year in Listowel, and signing Alice Lyons whose first novel, Oona, will come out next spring. We want to publish works that sing. You can broadly tell in the first four pages if something contains that immediate, visceral quality. It’s very subjective - there are of course books that we’ve passed on that have become well-known but just weren’t to our taste.

One of the books I am proudest of publishing is the Dublin edition of Ulysses in 1997, bringing Joyce home. We worked with maverick geniuses Danis Rose and John O’Hanlon, who then went on to give us the definitive edition of Finnegans Wake in 2010. We also published a beautiful edition of Dubliners illustrated by Louis le Brocquy; three classic texts made available to the reading public.

With non-fiction, I feel on safer ground because you can rely on the excellence of the writing and the intrinsic interest of the subject. We try, in a creative sense, to develop a market rather than follow it and I feel that’s important. We avoid genre such as crime and romance. Memoir and biography are vital components of the Lilliput list, thinking especially of Séamus Mallon’s recent political and personal memoir, A Shared Home Place. Publishing is inherently autodidactic; you read about things you want to learn about, so history has always been an important part of our list and a strong attraction for me, having studied the subject at Trinity.

If I had not become a publisher, I would have been an antiquarian bookseller. The essence of books is their physical being. I collect a lot of books and I dream of one day having a huge circular library in which all my books are arranged by year of publication to see the physical evolution of the book as object. People do need bookshops and libraries, despite Amazon hollowing out the whole of retail on the high streets. Bookshops are becoming more specialist and are run by individuals with a passion for books, so readers are served by people with knowledge. I think we’re holding up our end, where people recognise Lilliput as a “brand”, to use that awful expression, but a brand of excellence, something that will guarantee a certain standard of writing and production.

Books are a lever to the mind and the imagination; they’re a release. They can be an escape, but more importantly are recording devices that embody the human spirit and lead from one to the other like stepping stones. I don’t think there is anything that can replace books: they are vital to mankind’s wellbeing. Each is a challenge to get right, to match form with substance. That’s what publishing is, bookmaking in essence. On the whole, publishing is a way of life rather than a business, for better or worse, though you have to do your best by your authors. It’s important to stay alive commercially, but that’s not really why you’re in it. Reading a script, forming a book, is an immersive experience, very tactile, very real. Bricks to Babylon, reflective spaces. It’s the real world.