We should stop calling Boris Johnson by his first name only 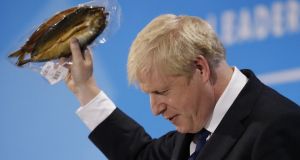 It seems as if Boris really is set to be the UK’s next prime minister. Who would have thought Boris had it in him when he was getting sacked from the Times for falsifying a quote? You have to hand it to old Boris.

Can you see what we’re up to here? It’s hard to think of another senior British politician who has, in recent decades, been so frequently referred to by only his or her forename.

Mrs Thatcher got a bit of this from opponents: “Thatcher! Thatcher! Thatcher! Out! Out! Out!” doesn’t have the same ring. But John Cole, much-missed BBC political editor, would have chewed off his own arm before calling the PM “Maggie” in a to-camera piece. His successors are less fastidious when it comes to Mr Johnson. That politician is still addressed formally in news reports - you won’t catch Denis Staunton, this newspaper’s London Editor, up to any casual Borissing - but even the most sober of analysts will drop the odd dangling forename when discussing his leadership prospects.

Louisa Compton, commissioning editor for Channel 4’s Dispatches, is among those calling for a halt. “Please can journalists STOP referring to Boris Johnson as just ‘Boris,’” she tweeted recently. “He’s a politician - we shouldn’t use first names for politicians - doing so is over-familiar and gives the impression they’re our mates, or much loved comedy characters.”

Ms Compton is correct. The informal approach does help dull the abrasive edge to Mr Johnson’s less lovely outbursts. It invites us to view them as the forgivable ramblings of a silly pal. There is a slot to accommodate the word “just” situated somewhere on the upright of his capital “B”. Oh, never mind the offensive wittering about Muslim women looking like “letterboxes. It’s just Boris. So, the coppers were called round after a late-night disturbance. It’s just Boris. And so on.

To this point, there have been few downsides to the unusual familiarity. The British public - like him or loathe him - has been persuaded that he is a part of the happy mono-named community that also includes Adele, Bono and Liberace. He is as much a part of the furniture as Enya. Right? Mr Johnson has consciously contributed to the creation of this alter ego. Born Alexander Boris de Pfeffel Johnson, he dragged forward the shorter middle name when fashioning the faux-befuddled comic character that still shrouds the real man.

The identity firmed up during his early sideline as carnival prankster on TV shows such as Have I Got News For You? Pantomime performers rarely demand formal address. It helped that his first name was modestly unusual. Remember that, when marching in support of Enoch Powell, a less clubbable right-wing populist, in the late 1960s, London dockers carried signs reading “We Back Enoch”. His forename was sufficiently uncommon to work as a brand. You could say the same of Boris. You could say the same of Evita (though Mr Johnson would probably rather you didn’t).

None of these arguments registers so strongly on this side of the Irish Sea. For decades, commentators have glibly referred to taoisigh by their first names: Leo, Enda, Bertie, Charlie. This has something to do with a more general informality in professional dealings (your plumber and your barrister have always been likely to forename you here) and a backslapping, baby-kissing attitude to campaigning that promotes personal connection over such lofty notions as competence.

Did it demonstrate a reluctance to afford female candidates the same respect as their male rivals?

There was some controversy during the 2016 US election about the media’s habit of referring to Mr Trump’s opponent as just “Hillary”. They were, when discussing the Republican candidate, much less likely to isolate his excellent Anglo-Caledonian forename. Was this low-level sexism? Did it demonstrate a reluctance to afford female candidates the same respect as their male rivals? Almost certainly not. The habit first emerged when distinguishing Mrs Clinton from her husband.

Her closest rival within the Democratic party was, after all, regularly referred to as just “Bernie”. We talked of the “Bernie Bro’”. We talked of “Bernie or bust”. Again, that name worked well as a brand. Expect Kamala Harris to become just “Kamala”. Stuck with a less exotic, more commonplace identifier, Elizabeth Warren is likely to be “Senator Warren” forever.

Hillary, Bernie, Kamala and Senator Warren all came from very different places to Mr Johnson. A deal of informality is (or would be, in Warren’s case) useful in softening their hardcore politico edge. It looks as if the probable next prime minister has the opposite problem. Over the last few weeks, his handlers have dampened the buffoonery and schooled him in the art of being boring.

The featherweight voters who enjoy him in clown mode are already in the bag. He is now courting those who prefer to see him as The Right Honourable Boris Johnson MP. Think of Larry Fishburne when, moving to more serious roles, he restyled himself Laurence. Think of The Rock when he became Dwayne Johnson. It would do Mr Johnson no harm to become The Politician Formerly Known as Boris.

Not that anything can stop him now.