The trailer exists to reassure the millions who grew up with Mean Streets, Goodfellas, Casino and The Departed. 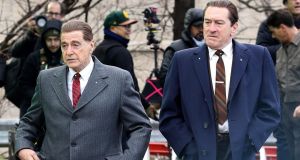 The Irishman: Al Pacino – astonishingly, making his debut in the Scorsese wheelhouse – and Robert De Niro

Golly. Look at the shots of Robert De Niro as a young man. They must have taken those when The Irishman began shooting, in 1988. It’s the Boyhood of gangster thrillers. Right?

Hey, I’m just busting your balls! But Martin Scorsese really has been working on this project for a long time. The first deal was done at Cannes in 2016. Netflix came on board in February 2017 – who else could afford the alleged $200 million? – and the film began shooting in the summer of that year. Now we finally have a trailer.

It would be understating the case to suggest the scenario is very much in the great man’s wheelhouse. Scorsese Wheelhouses pioneered this structure in the mid-1970s and has been returning for retunes about once a decade. The SW company owns the patent and all the worldwide rights.

There may be folk unexcited by the familiar rhythms of the trailer – which, let us again stress, is only a trailer – but I doubt I have ever had them around for cannoli. The promo gives us a grey-blue shot of Edward Hopper Street. It gives us Pesci being sinister. We get a bit of Pacino leaving the scenery unchewed. The glimpses of Rodrigo Prieto’s cinematography tantalise, and the score, whether from the eventual soundtrack or not, promises weirdness with the period extravagance.

Obviously there are juicy allusions to the surrounding history – the John F Kennedy assassination in particular – but the trailer exists to reassure the millions who grew up with Mean Streets, Goodfellas, Casino and The Departed.

Two stubborn questions still hang over the project. One is partly addressed. The other still nags away. Much of The Irishman will, we believe, feature digitally de-aged versions of the lead actors. There is no escaping one’s own awareness that De Niro in the last shot has lost 20 or 30 years in the CPU. An unkind viewer might draw comparisons with the recent, pointless Lion King (only a rotter would mention Cats), but the boffins’ work is to a purpose here, and this version of De Niro’s face at least looks more convincing than the surgically enhanced mugs some of his contemporaries sport. The technique worked fine for briefer shots of Sam Jackson in Captain Marvel and Nicole Kidman in Aquaman. It remains to be seen if it can be sustained over the guts of a long film.

The other question is how this Netflix release will be distributed in domestic cinemas. A theatrical release is promised. That could mean anything from an Oscar-qualifying run in just Los Angeles and New York (unlikely) to a huge worldwide release a month before arrival on Netflix (still less likely). Netflix’s Roma played in Ireland in just a few cinemas the day it landed for streaming. That is surely the least we can hope for.

The Irishman premieres at the New York Film Festival on September 27th.