All hail the Walkman and its legacy of individual freedom 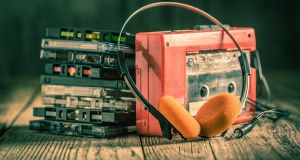 The Walkman: when people first consumed entertainment in their own cocooned space. Photograph: iStock

It is 40 years this month since the launch of that electronic device. Obviously, it took a while for the Walkman to catch on in Ireland. That’s how culture worked then. The 1960s happened in the 1970s. By the time the sexual revolution arrived here the Americans were already embracing the new puritanism. But the Walkman did eventually kick us towards the current cocooning of popular entertainment.

The transistor radio started that shift. A decade before Masaru Ibuka, co-founder of Sony, instructed his staff to design a portable, playback-only stereo, kids were listening to T Rex and Mud on similarly sized plastic boxes. The Walkman gave them greater control.

It ushered in the compilation tape (nobody then called them “mixtapes”) and its use as a reliably ineffective seduction aid. Somewhere there is academic research proving that no woman has ever listened to all 20 tracks on any tape proffered by any eager suitor. It doesn’t matter if, using brief pieces from early Brian Eno recordings as stuffing, you filled the C-90 from the first tape leader to the last. Nobody cared that you’d given it a hilarious name and collaged a cover from last week’s NME. “Erm … What did I think of the Nipple Erectors track? It … had a great beat?”

The rise of the CD forced Sony to develop the famously terrible Discman, a device that worked only a little better than strapping a turntable round your waist

The machine also advanced the notion of personal electronics as fashion. We’re not talking about the original TPS-L2 here. Retailing at a million pounds (well, plenty anyway), that first model had all the portability of a fridge freezer and all the design flair of a Trabant motorcar. The TPS-L2 actually came with a sling that allowed you to wear it like a satchel. It was the lovely, neat WM-2 that opened the long path towards YouTube videos in which maniacs “unbox” the latest iPhone. (In apparent tribute, there is now a video on that site of a restaged WM-2 unboxing.) The orange-padded headphones were as much a symbol of the age as the leg warmer or the vinyl tie. Never before had technology become an essential part of an era’s daywear.

In all the mourning for the vinyl LP that accompanied the arrival of the MP3 there was little acknowledgement of the fact that cassettes, thanks largely to the Walkman, first outsold that medium as long ago as 1983. All those lovely sleeves that other people used to roll joints on? The fresh smell when you slid the record out of the inner bag? Blah, blah, blah. Before the end of Ronald Reagan’s first term, the LP was already looking like old-school tech. A few years later, the sex-negative compact disc – literally a piece of computer equipment – began its rise to market dominance.

The Sony Walkman fought its corner in a series of interlocked wars. In most territories, competitors had to name their reverse-engineered product a “personal stereo”, but, in German-speaking countries, courts concluded that “Walkman” had become the accepted generic term. This is why Hoover really would prefer you to call their most famous appliance a “vacuum cleaner”.

The rise of the CD forced Sony to develop the famously terrible Discman, a device that worked only a little better than strapping a turntable round your waist. There were MiniDisc versions. You can still buy an MP3 incarnation. But streaming on the smartphone ultimately annihilated the personal-stereo market.

The core innovation has, however, remained intact since Mr Ibuka launched the TPS-L2. Punters still consume entertainment in their own cocooned space. The Sony Watchman, a pocket television, never caught on, but the streaming revolution has allowed every member of every family to enjoy their chosen video or audio in undisturbed isolation.

The communal watching experience has gone for ever. No more will kids squirm with embarrassment at unexpected sex scenes in I, Claudius. No more will parents get to make unfunny jokes at the haircuts on Top of the Pops. We’re all watching what we want and nobody is bothering us while we’re doing it. The sober consensus is that this is a bad thing. I’m not so sure. All hail the Walkman and its legacy of individual freedom.

Blood: A disappointing journey into the Irish psychosphere

Are psychopaths born or made, and can they be cured?
8

Love Island: This pair are €60k richer. The rest of us feel much worse off
Real news has value SUBSCRIBE