A sneak preview of this Saturday’s book pages 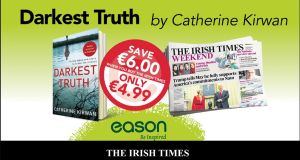 Darkest Truth by Catherine Kirwan is this weekend’s Eason Irish Times offer. When you buy the paper, you can pick up the bestselling author’s latest thriller for €4.99, a saving of €6. Read our review by Declan Hughes.

The cover story in Ticket on Saturday is a useful guide to the best new and classic audiobooks by Darragh Geraghty. Our summer fiction series climaxes with Sable, a new short story by Eoin McNamee.

Our reviews include Ian Hughes on This Is Not Propaganda: Adventures in the War Against Reality by Peter Pomerantsev; James Conor Paterson on The Nickel Boys by Colson Whitehead; Tony Fahey on Home by Eoin Ó Broin; Niamh Donnelly on How to Forget by Kate Mulgrew; Chris Kissane on Our Tangled Speech: Essays on Language and Culture By Aodán Mac Póilin; Chris Cusack on The Writing Irish of New York, edited by Colin Broderick, with a look also at his two memoirs; Frank MacGabhann on Women’s War: Fighting and Surviving the American Civil War by Stephanie McCurry; Houman Barekat on Nobber by Oisín Fagan; Sarah Gilmartin on Expectation by Anna Hope; and Claire Hennessy on the best new young adult fiction.