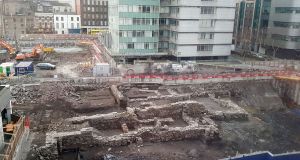 The unearthed ruins of a 300-year-old church on the site of the former Apollo House office block at Tara Street, Dublin. Photograph: The Irish Times

The ruins of a 300-year-old Catholic church unearthed on the site of the former Apollo House in Dublin city centre are set to get a new lease of life as part of the developer’s plans for a new office scheme on the site.

The developer, Marlet, which engaged archaeologists to carry out a full excavation of the church and document their findings, has started to remove the remnants of the church from the Tara Street site to a storage facility in west Dublin.

While the developer is under no obligation to preserve this material, a source familiar with Marlet's plans for the site said that the recorded stone will be restored where possible and reintroduced to the planned College Square scheme as part of a “cultural centrepiece”. The proposed feature will carry an accompanying descriptor noting its provenance and detailing its history within the context of the site.

Prior to the development of the new mixed-use scheme, the site had been home for several decades to Apollo House. While the building was otherwise unremarkable, it was occupied for a time in 2016 by groups protesting about the homelessness crisis in Ireland.

As part of the planning conditions for the site’s redevelopment, a licence for archaeological excavations was granted by the Department of Culture, Heritage and the Gaeltacht to Marlet.

The developer was mandated to hire archaeologists to carry out excavations and document their findings. The first ruins to be uncovered were the thick stone walls of a national school which was still standing in the shadow of the office block as late as the mid-1980s. The ruins, dating  from the turn of the 18th century, were unearthed last November by archaeologists led by Franc Myles of the historical buildings consultancy firm Archaeology and Built Heritage.

Speaking to The Irish Times then, Mr Myles said: “We have to dig here very carefully because the church is a recorded monument.”

Diggers move in on the church and school ruins exposed by the demolition of Apollo House in Dublin. pic.twitter.com/LiMg6CYGfu

While Mr Myles said his team were expecting to find an original quay wall and timber structures dating from the 1670s, nothing of that nature was uncovered.  He suggested that when Apollo House was being built in the late 1960s, most of the structures of archaeological importance “were basically demolished”.

He said evidence of the quays are “probably still under Mulligan’s Pub” on Poolbeg Street.

Upon completion, the College Square development will comprise a total of 37,622sq m (404,960sq ft) of offices distributed across the sites occupied formerly by Apollo House and the neighbouring College House.

While 12,622sq m (135,863sq ft) of that office space is to be provided in an 11-storey building, Marlet could yet increase the height of the block through the addition of a 10-storey tower comprising 54 build-to-rent apartments. Although the developer secured planning permission for these units from Dublin City Council in December, the decision has since been appealed by An Taisce.

Should An Bord Pleanála decide in Marlet’s favour, the company is aiming to deliver 45 one-bedroom and nine two-bedroom units, complemented by 207.9sq m (2,237sq ft) of internal communal amenity space, as well as external terrace areas. The combined height of the amended College Square development would then rise to 78.95m (262ft) above street level.

The history of the church

A church was first built on the site in 1709 in Penal times when the practice of Catholicism was banned. In spite of the religious restrictions, the chapel flourished and attracted thousands of worshippers

“There was probably a building used as a chapel from the foundation of St Andrew’s parish in 1709 and it is depicted on John Rocque’s map [of Dublin] of 1756,” the archaeological report prepared for the developers says.

By 1811, the parish had grown and “it was decided that the chapel would have to be reconstructed”, the report says.

The inscribed foundation stone for the new chapel was laid on April 23rd, 1814, by then parish priest Dr Daniel Murray, who went on to serve as the Archbishop of Dublin from 1823 to 1852.

Work on a new structure duly started, and by 1831 considerable progress had been made. However, progress stalled when there was a split in the ranks of the faithful.

A newly appointed priest of St Andrew’s Parish found “a more desirable site for a new church was available on wasteland at a more central location in the parish on Westland Row”.

Work at the Tara Street church, which features prominently on the earliest ordnance survey maps of Dublin, was halted. The building was subsequently deconsecrated.