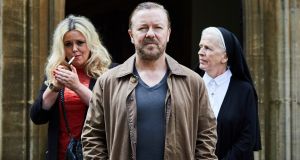 Ricky Gervais in his Netflix series After Life: the show was popular with viewers but received mixed reviews

Nineteen years ago, one more of British comedy’s great frustrated underachievers made a first appearance. David Brent is still honoured beside Rigsby, Mainwaring and Fawlty, but Ricky Gervais, his creator, long ago evolved into a more divisive figure. In an era of lightning rods, Gervais is among the most indestructible. Put on your rubber-soled shoes. He is about to host the Golden Globes for a fifth time in 2020.

Over the last decade, Gervais has become increasingly concerned with the alleged oversensitivity of cultural gate keepers. “I’ve always said, just because you’re offended doesn’t mean you’re right,” he barks at every opportunity. He has a particular interest in “pushing boundaries” (that’s to say, being rude) about transgender issues. The comic’s 2013 special Humanity featured around 20 minutes of material on the subject — likening trans people to folk wishing to become chimpanzees — that seemed calculated to provoke the “offence” about which he cares so little.

We do not have space to dig into all the justifications and rebuttals. Maybe he’s putting on a persona. Saying “it’s just a joke” is rarely a defence in itself (one exception is when the reader has misunderstood sarcasm). You know how these arguments go. But it requires no embrace of the snowflake manifesto to discern a statement in the Golden Globes invitation.

A great deal has changed since Gervais presented in 2016. At the close of the following year, the Weinstein scandal broke and the industry embarked on a period of soul-searching. The Hollywood Foreign Press Association (HFPA), the quirky body that runs the Globes, has reason to thank this weekend’s MC. Long regarded as a boozy joke, the awards came alive when he first arrived in 2010. He was rude about the winners. He was rude about the presenters. He was particularly rude about the HFPA. If we may toy with an oxymoron, that cosy danger gave the show a real jolt.

Last year, the organisers seemed to acknowledge those days were over when they invited nice Sandra Oh and nicer Andy Samberg to spread warmth across their hosting duties. They had the sense to make a joke out of the brief, but the monologue was still boring enough to cause planes to fall drowsily from the sky. The HFPA could have turned back to the likes of Tina Fey and Amy Poehler. Instead, they unlocked the protective cage that had been placed around the big red Gervais Button after Weinstein broke.

The star could hardly have responded more awkwardly. Already under fire from those who remembered his exhausting jokes about Caitlyn Jenner, he promptly waded into the lake of viscera that was gathering round JK Rowling following her own contribution to the transgender debate. Gervais responded “offensively” to a satirical tweet addressing the author’s support for a woman sacked for using exclusionary language against transgender people. It went back and forth. Gervais didn’t apologise (as if), but he did acknowledge that he accepted transwomen as women. The HFPA squirmed.

In truth, it doesn’t much matter what Gervais now says or does. He has been identified as an emblematic figure in the current online culture wars. The response to his recent Netflix series After Life is educative. Concerning a man freed to (sigh) say whatever the hell he likes following his wife’s death, the show was popular with viewers — one of the top 10 most-watched on Netflix last year in the UK and Ireland — but received mixed reviews. Critics were then bombarded with abuse from Twitter accounts boasting football-related avatars. The words “woke” and “triggered” were placed within witheringly satirical inverted commas. Gervais has achieved lightning-rod status. The medium is the message and he is the medium that matters.

At risk of echoing Trump on Charlottesville, all sides are to blame for refashioning artists and artworks into the material for purity tests. Within hours of Todd Phillips’s Joker winning the Golden Lion at Venice, the squabbles over its worth ceased to concern performances, cinematography or narrative coherence. Though only superficially political, the film is here to establish whether you are a “woke snowflake cry-baby” (for) or a “sexist, racist incel” (agin). Meanwhile, a mass of reasonable people nods along without feeling nudged a millimetre closer to either extremist wing.

There have always been controversial performers and controversial works, but the fetid online discourse turns those things into lightning rods quicker than ever before. None of which is to pretend that the current subjects have made any serious effort to defuse the atmosphere. As awards season kicked off, Phillips, who first found fame with The Hangover, declared wearingly that he had left comedy because of (you’re way ahead of me) “woke culture”. Gervais surely knew what he was doing when he later tweeted “film & performance of the year” beneath Joker’s official handle.

Yes, they probably have it coming.