Donald Clarke: Harvey Weinstein's lawyer took us on a trip back to the Sexist Seventies this week 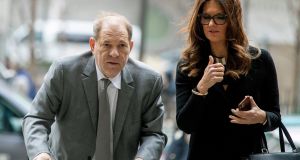 Harvey Weinstein arrives at court with his lead attorney Donna Rotunno on the first day of jury selection for his sexual assault trial in New York. Photograph: Mary Altaffer/AP

I’m all for Women’s Lib. It’s great that ladies are burning their bras. The bouncy new look goes well with “mini-skirts” and “hot pants”. If this continues they may end up burning their blouses. Lucky men! Ladies should, however, be careful not to go too far. If they truly want equality they can’t expect to have doors held for them, to be served first in restaurants or to get offered seats in trains. Is that what the women of 1972 really want?

Well, thank God all that’s over. I am decrepit enough to have heard these words being spoken and to have seen them printed in relatively respectable newspapers. By the time of the second On the Buses film, most fully evolved humans had, however, got their priorities in order. Right?

Let us not get into the business of shaming lawyers just for representing Harvey Weinstein. Everybody from Rosa Parks to Adolf Eichmann deserves an attorney and nobody thanks you for taking the bad guy as a client. Let us, rather, shame Donna Rotunno for talking like a Daily Express columnist from the time when you could still smoke in operating theatres.

Speaking to Vanity Fair about the #MeToo movement, Mr Weinstein’s counsel (for it is she) set the clock back with a gusto that might dizzy even Jacob Rees-Mogg. “I feel that women may rue the day that all of this started when no one asks them out on a date, and no one holds the door open for them, and no one tells them that they look nice,” she said.

Campaigns such as #MeToo have been aimed at making rape a little less likely. If the price is some trivial shift in etiquette then I’m betting most women will live with that. In the 50 years since I first heard the argument above, I have yet to meet a woman who thinks equality and safety are less important than getting first crack at the canapés.

Yet this conversation has never fully gone away. A few years back, a future Brexit Party MEP suggested – on the evidence of stuff he’d heard somewhere – that feminism had doomed women to a desperate existence pumping jacks in roadside monsoons. “Men don’t want to help women because we’re scared of appearing patronising,” Martin Daubney wrote in the Daily Telegraph. “You might offer to help change a tyre and get a slap for being sexist.” People tell me it’s worse than that. People tell me men are being biffed over the head with tyre irons and buried in laybys.

This nonsense is more prevalent in the United States. That country is (though its citizens would be surprised to hear it) more formal than Britain or Ireland and, even in relatively progressive communities, often expects men to pay for meals on dates, order drinks in bars and generally behave like southern gentlemen in ancient Bette Davis movies.

Fox News delights in explaining how “extreme feminists” are endangering these antediluvian habits. Interestingly (and tellingly), the supposed fightback takes in two not-quite-compatible arguments. Ms Rotunno’s case is that feminists will soon be disappointed to discover that their arguments have undermined cherished social privileges. A piece on Fox last year suggested that the awful feminists are actively dismantling those privileges and ruining it for the sane rest. “The good news is chivalry is not dead, but the bad news is there’s a bunch of militant feminists who are trying to kill it for us,” Carol Roth said. “I’m assuming you are like I am and love a little bit of chivalry – a nice man opening a door for you or perhaps letting you order first.” Chivalry? Never mind tabloid culture of the 1970s. We’re talking Sir Gawain and the Green Knight here.

Here comes the antithesis. Over the last few decades some confusion about social decorum has set in. The hierarchies of bus seat occupation could generate a literature in themselves. Do pregnant women outrank elderly people? It depends how elderly and how pregnant. Here’s a trickier one. Does an elderly lady outrank an equally elderly gentleman? I’m still standing up for either, but, though I can’t say why, I tend to think the answer to that last question is “yes”. It is, however, reasonable of me not to offer my seat to a healthy woman half my age. Isn’t it? Yes? No? Maybe I’ll just take my bike. It’s really not that far.

All of this is so much hot air. This argument has never been about a passion for Arthurian etiquette. It’s been about a distrust of feminism’s driving impulses. What grinds reactionary gears is the terrifying prospect of modernity – equality, safety, opportunity – not the prospect of your date ordering directly from the waiter.

Hold the door for whomever you please.

Don’t Be Evil: The Case Against Big Tech: Important book on corporate giants
5

‘We are the weirdoes, mister’: why women love witches
9