Ghost in the Shell needs a soul, like Scarlett Johansson’s robot

Scarlett Johansson stars in the Iive action remake of the 1989 Manga animation, Ghost in the Shell. 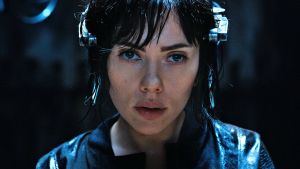 Scarlett Johansson as The Major in Ghost in the Shell. Photograph: Paramount Pictures

Film Title: Ghost in the Shell

Under the watchful gaze of cameoing Japanese celebrity "Beat" Takeshi, Major Motoko Kusanagi (Scarlett Johansson) and her task force Section 9 are hunting down a powerful new hacker, who, in turn, is hunting down the boffins at Hanka Robotics, a corporation characterised by one ludicrously evil suit dude (Peter Ferdinando) and seemingly endless amounts of henchmen with poor shooting skills. Meanwhile, the Major pouts over her personhood. Or robothood. Whatever.

There comes a moment in Mamoru Oshii’s 1995 cyberpunk classic Ghost in the Shell when existentially troubled cyborg Motoko Kusanagi is confronted by the mysterious AI known as the Puppet Master: “A copy is merely a copy,” he says, as the heroine ponders Cartesian dualism in the age of cybernetic bodies.

Whitewashing, alas, is the least of this film’s problems. Following a troubled 10-year development, Ghost in the Shell looks exactly as one expect a project that has spent a decade getting kicked between studio committees to look. Rather suspiciously, scenes can appear choppy and glitchy and certain characters are introduced only to go AWOL. It must have been the hacker, right?

A Caucasian actor with an orientalised hairstyle – we’re not digging these mixed messages – Scarlett Johansson has virtually nothing to do as Major Motoko Kusanagi that isn’t covered by the job title Sexy Fighting Lady Robot. Was it intentionally ironic that, in an adaptation of a manga that ponders second-order simulacra, Johansson’s performance could easily have been copied, pasted and coloured in from her performances as Sexy Fighting Lady Assassin (The Avengers), Sexy Fighting Lady Limitless (Lucy), or Sexy Fighting Lady Alien (Under the Skin).

For good measure and even more déjà vu, one scene references her performance in Lost in Translation by way of underpants. Where Masamune Shirow’s 1989 manga and Mamoru Oshii’s 1995 film of same grappled with the philosophies of Jean Baudrillard and Frederic Jameson, Rupert Sanders’ movie will make you think about underpants.

Why, given that Sexy Fighting Robot Lady, has a Barbie body, does she bother with underpants and clothes in some scenes but not in others? Do Donald Duck rules apply? As she has no other sexual characteristics, what’s the deal with the boobs?

These are questions that can only arise during a dull film. And Ghost in the Shell 2017 is certainly that. (What’s that you say? It’s a movie for 15-year-old boys, not grown-ass women? Tell that to the 15-year-old boy who had to be nudged awake beside me.) It’s also a safe film: anime for those who think that means cartoons or something, or cyberpunk for people who imagine that’s a style of boot.

The dumbing-down is disappointing but it might have made for a decent cops-and-robbers actioner if director Sanders and screenwriter Jamie Moss hadn’t left in the urban pillow shots and contemplative spaces of the 1995 film. Sadly, we have nothing to contemplate, except our own boredom. Every 30 minutes or so, somebody turns to the camera – as if they’ve just momentarily remembered they’re remaking Ghost in the Shell – and says something like: “Memories, fantasies: what’s the difference?” or “Your ghost – your soul – is still you.”

It’s hard to be lectured about the soul from a movie as soulless as this one.