We don’t notice the Gospels’ failure to describe Jesus because we ‘know’ what he looked like thanks to all the images we have. But how accurate is that depiction? 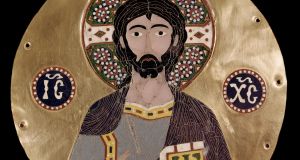 Everyone knows how to recognise Jesus. He is portrayed in art, film and literature in much the same way. His image is found repeatedly in countless churches and Christian buildings. He is usually somewhat European: a man with nut-brown hair (sometimes blond) and light brown or blue eyes. He has a long face and nose, and long hair and a beard. His clothes are also long: a tunic down to the ground, with wide baggy sleeves, and a large mantle. He is fairly well-tended (combed hair, good teeth, clean) and his clothes look newly washed.

But what did Jesus look like really, as a Jew in 1st-century Judaea? What colour was his skin? How tall was he? What did he wear?

These are questions I grappled with as I wrote my book, What did Jesus look like? (now published with Bloomsbury T&T Clark). It is a subject that has interested me for a long time. I wanted to see Jesus clearly.

In the Gospels, he is not described, either as tall or short, good-looking or plain, muscular or frail. We are told his age, as “about 30 years of age” (Luke 3:23), but there is nothing that dramatically distinguishes him, at least at first sight.

We do not notice this omission of any description of Jesus, because we “know” what he looked like thanks to all the images we have. But the Jesus we recognise so easily is the result of cultural history. The early depictions of Jesus that set the template for the way he continues to be depicted today were based on the image of an enthroned emperor and influenced by presentations of pagan gods. The long hair and beard are imported specifically from the iconography of the Graeco-Roman world. Some of the oldest surviving depictions of Jesus portray him as essentially a younger version of Jupiter, Neptune or Serapis. As time went on the halo from the sun god Apollo was added to Jesus’s head to show his heavenly nature. In early Christian art, he often had the big, curly hair of Dionysus.

The point of these images was never to show Jesus as a man, but to make theological points about who Jesus was as Christ (King, Judge) and divine Son. They have evolved over time to the standard “Jesus” we recognise.

So can we imagine Jesus appropriately in terms of the evidence of the 1st century? I have wondered about the fact that Jews were known in antiquity as a “nation of philosophers” (Josephus, Apion 1:179). Was that partly because of their appearance? A male “philosopher” in antiquity was thought to have shortish hair and a rough beard. The idea is that such men did not bother to visit barbers very often, as they were concentrating on more important things. But their hair would not have been very long. The acceptable style in the Roman world was to be clean shaven and short-haired. As Paul says in his letter to the Corinthian church, “Does not even nature tell you that for a man to have long hair is dishonourable to him?” (1 Cor. 11:14). The only exception to that for Jews was if you undertook a Nazirite vow (Numbers 6:1-21; Acts 21:24). For this vow, you let your hair grow, and didn’t drink wine, among other things. John the Baptist was a lifelong Nazirite, dedicated by his parents to God, as the Gospel of Luke indicates (Luke 1:15), but Jesus was not, because he is often found drinking wine (Matt. 11:19).

There are indeed portrayals of Jewish men with the “philosopher” look on Roman coins issued by the emperors Vespasian and Titus. These show captive Jewish fighters (partially stripped), after they revolted against Rome in the years 66-70 AD. It would be reasonable to think then that at least some Jewish men in Judaea looked like this, even if there is stereotyping.

As for Jesus’s body, I’ve consulted experts on ancient skeletons in Israel. What I have learnt is that Judaeans of this time were closest biologically to Iraqi Jews of the contemporary world. In terms of a colour palette then, think dark-brown to black hair, deep brown eyes, olive-brown skin. Jesus would have been a man of Middle Eastern appearance. In terms of height, an average man of this time stood 166 cm (5 ft 5 in) tall.

Our overall appearance, though, is not just about our bodies. Much depends on what we do with our bodies. There are some incidental details in the Gospels that tell us what Jesus wore.

He wore a tunic, called a chiton in Greek. Often you would have two: an outer one and a thinner inner one, sometimes called a sindon (Mark 14:63). An outer tunic in Judaea was invariably made of two pieces of material, one front and one back, joined at the shoulders and sides, with stripes running from shoulder to hem. The inner tunic could be made of one piece. This is a detail of interest to me, because Jesus is said in the Gospel of John (19:23-24) to have worn a one-piece tunic. John the Baptist asked people to give away their second tunic (see Luke 3:11). Wouldn’t Jesus have done so? In wearing only an inner tunic, he would have been dressed in very basic clothing.

Men’s tunics were usually knee-length. Long tunics (stolai) were worn by women or occasionally by wealthy men in high-honour positions. But Jesus states: “Beware of the scribes who desire to walk in long tunics (stolai), and to have salutations in the marketplaces, and have the most important seats in the synagogues and the places of honour at banquets” (Mark 12:38). Clearly he is not one of them.

Over a tunic, a man would wear a mantle (himation, Mark 10: 50). This was a large piece of woollen material. Power and prestige were indicated by the quality and colour: purple and certain types of blue and red. Jesus’s disciples see his clothing (mantle and tunic) transform into a bright white hue at the Transfiguration (Mark 9:3=Matt. 17:2), which means these were not coloured or bright white as a rule. In terms of the “before” and “after” of a washing powder advertisement, Jesus’s clothing was the “before”.

Thus in the end we see him as a man of Middle Eastern appearance, with scruffy, shortish hair and beard, wearing very basic clothing: a knee-length, thin, one-piece tunic and an undyed mantle.

With a close reading of the Gospels, it turns out that Jesus’s appearance coheres perfectly with his teaching. In advocating his disciples give away all but their essentials to the needy (Matt. 19:20-22), he practised what he preached. I wonder if we would recognise him, as he really looked, if we met him on the way.
Joan E Taylor is Professor of Christian Origins and Second Temple Judaism, King’s College London

New Irish Writing: A Little Cloud by A Joseph Black
5