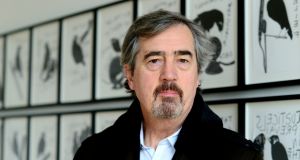 Sabastian Barry: “It is no burden to assert, to as many people as possible in as many places as possible, that we live in a golden age of prose writing in Ireland.” Photograph: Cyril Byrne

President Michael D Higgins today announced Sebastian Barry as the Laureate for Irish Fiction 2018-2021 at a ceremony in the Arts Council. He takes over the laureateship from Anne Enright for a three-year term.

The Laureate for Irish Fiction is an initiative of the Arts Council and is run in partnership with University College Dublin and New York University. The role seeks to acknowledge the contribution of fiction writers to Irish artistic and cultural life by honouring an established Irish writer of fiction, encouraging a new generation of writers, promoting Irish literature nationally and internationally and encouraging the public to engage with Irish fiction.

Sheila Pratschke, who chairs the Arts Council, said it was “immensely proud to award Sebastian Barry the honour of the Laureate for Irish Fiction 2018-2021. Sebastian is a writer of profound humanity and grace. Over the past four decades, he has produced a body of work that is testament to his passion for, and commitment to, literature and writing. We very much look forward to how he will shape the role of Laureate and engage with readers and writers over the next three years,”

Speaking about their choice, the international selection panel led by poet Paul Muldoon said, “With his soul-searching, heart-stopping prose Sebastian Barry takes Irish fiction where it hasn’t been before. With transcendent insight as well as a storyteller’s ingenuity he teaches us to see the world differently, and to look more deeply into our own hearts. This most lyrical of myth-makers magically re-arranges our synapses.”

Speaking at the event, Barry said, “I am delighted by this great honour, all the more delightful for having been decided by such a tremendous team of judges. And Anne Enright, the first laureate, has set a very high bar. It’s a joyous moment, after 40 years of work. Mere longevity has given me a clear and wide perspective on the ‘fabulous generations’ now at work in Ireland. It is no burden to assert, to as many people as possible in as many places as possible, that we live in a golden age of prose writing in Ireland. And I am really happy to be the ambassador of this rather stupendous reality for a few years.

“Writers reading their own work can make an illuminating music and show something important about it in the very act of ‘singing’ it. I would like to pay homage to this during the course of my laureateship. Also to acknowledge the part played by readers in the life of books – in many forms of course, the necessarily private, but also in the newer form of the book club, an activity that can work surely anywhere, even in prisons, in detention centres, in hospitals, places where a life might otherwise be temporarily circumscribed. So I would hope to try and honour that.

“The mass of living Irish writers is distinguished only by the fact that there is such immense diversity of purpose and difference of styles. That is the great wealth of the present moment. There are writers who have worked the miracle of making their name in their twenties and others who have worked the concomitant miracle of working on from book to book for decades. What unites them is the ability to generate the shock that rare work gives the reader, not only in the pleasure and gratitude it engenders, but the serious business of the lines and engines of your own life finding answer and echo in another’s art.

“And I look forward to teaching at UCD and NYU and finding something cogent to say each year in the laureate’s lecture.”

Barry was born in Dublin in 1955. In 1988 his play Boss Grady’s Boys won the first BBC/Stewart Parker Award. He was elected to Aosdána in 1989. In 1995 The Steward of Christendom, which starred Donal McCann, premiered at The Royal Court in London and won many awards. In 1997 he received the Irish-American Fund Literary Award. In 1998 he published a novel The Whereabouts of Eneas McNulty with Picador. His novel A Long Long Way won the 2005 Kerry Group Irish Fiction Award, and was shortlisted for the Man Booker Prize and the Impac Prize. In 2008, The Secret Scripture was shortlisted for the Man Booker Prize and the LA Times Book Awards, and won the Costa Book of the Year, the James Tait Black Memorial Prize, and the Irish Book Awards Novel of the Year. He was elected a fellow of the Royal Society of Literature in 2009. On Canaan’s Side won the 2011 Walter Scott Prize. Days Without End won the 2016 Costa Book of the Year Award and The Walter Scott Prize, and was longlisted for the Booker Prize. He has three grown children, Merlin, Coral and Tobias, and lives in Wicklow with his wife Alison.

Barry will participate in a public interview with playwright Billy Roche in Gorey Library, Co Wexford next Tuesday, February 13th, at 7.30pm, and t a reading in Bridge Street Books in Wicklow, introduced by Caitriona Crowe, on Thursday, February 15th, at 7.30pm. More details can be found on the Arts Council’s website, artscouncil.ie.