Should Irish slavery supporter John Mitchel’s statue in Newry be taken down? 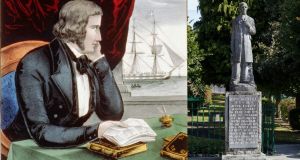 John Mitchel’s statue in Newry, right, should be accompanied by at least an explanation of the context – perhaps even by a work of art condemning slavery

The raising of a statue, of a person on a pedestal, is, usually, both an expression of collective admiration and of ethnic identity. The latter implies both inclusion and exclusion. Edward Carson, standing defiant, facing south, at Stormont, is sending different messages to two communities – we won, you lost. The raising of a statue says as much about the erectors as it does about the erected.

The historian will point out that Carson was a proud Irishman. He viewed partition as a defeat. He was a hypochondriac, but also that he was a loyal personal friend; that his views were both honestly held and fearlessly pursued. History and personality are too complex to be defined by one image.

Likewise with John Mitchel. He supported slavery. He even supported the reopening of the African slave trade but, ironically, he was supporting an institution he had no wish to benefit from. He never owned a slave yet he lost two sons, with one other maimed, defending the Confederacy. He also wrote ferociously in defence of the Irish peasant during the Great Famine; he despised ethnic conflict; he too was a loyal personal friend; he worked bravely, tending the wounded on the battlefield and accepted stoically the many misfortunes fate threw at him. His life with Jenny is a love story beyond the imagination of the most romantic novelist. However, he also loved hierarchy, hated progress and sought contentment in stagnation for all.

We may, rightly, condemn Mitchel for his support of slavery but Arthur Griffith, the founder of Sinn Féin, defended him and British cities like Liverpool and Bristol prospered from the slave trade, as did Admiral Nelson. Few of any status in the 18th and early 19th centuries did not benefit directly and/or indirectly from slavery, as we benefit from cheap labour on other continents. The British government compensated three thousand slave-owners.

Perhaps those who want statues removed do so because they tell of ethnic battles lost? Perhaps the same people are happy to see their own victors remain on their pedestals? Provided they are located in the appropriate territory I see no reason why statues proclaiming ethnic otherness should not remain. Cromwell should continue to stand outside Westminster. He should not stand in Drogheda.

Today, only the ill-informed would seek to erect a statue of John Mitchel but he and Nelson are standing and I do not think either should be removed. However, Mitchel’s statue in Newry should now be accompanied by at least an explanation of the context – perhaps even by a work of art condemning slavery.
Anthony Russell, retired from Anglia Ruskin University, is the author of Merrion Press’s Between Two Flags: John Mitchel and Jenny Verner, which deals extensively with both John and Jenny’s support of slavery, an evil institution neither would benefit from. The two flags in the title are the Irish Tricolour and the Confederate Battle Flag. He is a co-editor of and contributor to Irish Academic Press’s new book John Mitchel, Ulster and aspects of the Great Irish Famine