In her own words: Muriel Spark at 100

What radiates out of all this writing, fiction and non-fiction, is a bright, sharp and disciplined creative intelligence 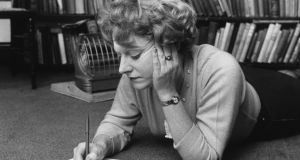 Muriel Spark is one of the most successful novelists of her generation. Photograph: via Getty Images

In a telling speech in New York in 1970 the 52-year-old Muriel Spark addressed what she called “The Desegregation of Art” and made no bones about what she meant:

“Our noble aspirations, our sympathies, our elevated feelings should not be inspired merely by visits to an art gallery, a theatre, or by reading a book, but rather the rhetoric of our times should persuade us to contemplate the ridiculous nature of the reality before us, and teach us to mock it. We should know ourselves better by now than to be under the illusion that we are all essentially aspiring, affectionate and loving creatures. We do have these qualities, but we are aggressive, too. And so when I speak of the desegregation of art I mean by this the liberation of our minds from the comfortable cells of lofty sentiment in which they are confined and never really satisfied. To bring about a mental environment of honesty and self-knowledge, a sense of the absurd and a general looking-lively to defend ourselves from the ridiculous oppressions of our time, and above all to entertain us in the process, has become the special calling of arts and letters.”

Spark’s 88 years of a greatly lived and travelled life, from her birth in a Scottish-Jewish family in Edinburgh on February 1st 1918 until her death in Italy in 13th April 2006, is characterised by an intense self-learning that makes her fiction such fascinating reading primarily because of the transposition of her experiences into a fabulously imagined world. Her characters, women and men, and their “situations” and landscapes have a material feel to them that captivates the reader. Reading Spark is like loving Renaissance art; there is a richness of image, a depth of suggestion and a light touch that masks the bigger picture – of how we cope with loss and neglect, of the elusive spiritual world she herself followed with her conversion to Catholicism and how it sits (often literally) on her characters’ shoulders. But above all when one enters the Spark territory one is entering a world of ironic laughter at human frailty, pretension and survival. And also, as this extract from The Poet’s House, a radio talk of 1960 makes plain, Spark knew exactly what was at stake:

“I’ve always been interested in what makes the adult writer start to write. Is it something compulsive within the person? Or is it, perhaps, some outward combination of circumstances? Because it’s one thing to feel quite certain within oneself that one has the ability to write and to be full of ideas and visions, but it’s quite another thing actually to get down to it. I think the getting down to it is the most difficult part. Even now, after years of practice I always have the greatest difficulty in lifting up a pen and sitting down to write. I can always think of other things to do which look more attractive at the time. But I always do get down to it in the end. It’s a sort of obsession. And once I’ve started to write, everything becomes easy, everything else is forgotten, and the hours I spend writing my novels or stories are perhaps the happiest hours of my life.”

Writing fiction was her delight but her writing about other writers is always a guide to best practice. Here, for instance, Spark is praising Nobel laureate Heinrich Böll, “the contemporary German author I most admire”. The reasons are worth recounting: “for the variety and steadiness of [Böll’s] vision and its extra-territorial dimensions; and for the stamina of his patient, almost documentary style”. She goes on to remark of his characters as “indomitably proceeding with their lives within, against and in spite of the interference and imposed values of modern bureaucracies, and moulds with wit and intelligence these characters in their own sweet and sour uniqueness”.

Asked about “The Book I would Like to Have Written, and Why”, Spark, while name-checking several possibilities including Evelyn Waugh’s The Loved One, The Book of Job which “enchants me above all other books in the Bible” along with the sonnets of Shakespeare, the dialogues of Plato, the notebooks of Kierkegaard, stories including James’s Daisy Miller, TF Powys’s Mr Weston’s Good Wine and novels by “most-admired contemporary novelist, Heinrich Boll”, is adamant: “I would not want to have written anything by anyone else, because they are ‘them’ and I am ‘me’. And I do not want to be anybody else but myself with all the ideas I want to convey, the stories I want to tell, maybe lesser works, but my own” (1981).

Such a refreshingly individualist spirit animates all of Spark’s 22 novels, her memoir, Curriculum Vitae, the Collected Stories, the poems and thought-provoking non-fiction, gathered into The Golden Fleece (2014) by her partner and friend, Penelope Jardine. What radiates out of all this writing, fiction and non-fiction, is a bright, sharp and disciplined creative intelligence. If there is an Irish parallel it might be Brian Moore, whose tense relationship with the Catholic Church, its teachings on sexuality and its oppressiveness, exists alongside the intimate touch of other places and another world entirely, a spiritual afterlife, as those who are physically gone and departed revisit the plots and settings of both novelists in unpredictable yet utterly convincing ways.

In her best-known novel The Prime of Miss Jean Brodie (1961) we time travel with the Brodie clan – six girls her pupils at the Marcia Blaine Academy – from the early 1930s Edinburgh as with Eunice Gardiner’s storyline: “You are an Ariel,” said Miss Brodie. Then Eunice began to chatter. She was not allowed to do cartwheels on Sundays, for in many ways Miss Brodie was an Edinburgh spinster of the deepest dye”. Fast forward 28 years though in the same coterminous scene: “When we go to Edinburgh,” Eunice said, “remind me while we’re there to go and visit Miss Brodie’s grave.” “Who was Miss Brodie?” [asks her husband]. “A teacher of mine, she was full of culture. She was an Edinburgh Festival all on her own. She used to give us teas at her flat and tell us about her prime.” “Prime what?” “Her prime of life.”

In Appointment in Arezzo: A Friendship with Muriel Spark (2017), Alan Taylor, a close and respected friend, informs us that after a long, difficult and stoic struggle with ill-health, Spark died a few short years after her triumphant return to Edinburgh and its world-famous Book Festival: “All Edinburgh, the Guardian reported, “had been fighting tooth-and-claw for a seat”. Indeed the 600 tickets “had sold within a couple of hours of going on sale. Apparently [a proud Taylor recalls] some tickets had changed hands for as much as £100, about 10 times their face value.” And worth every pence too! The event must have been very special, “walking tentatively with the aid of a stick, Muriel entered the teeming tent to a spontaneous, standing ovation”:

“When the applause abated Muriel took as her text a passage from The Prime of Miss Jean Brodie, reading slowly and with a pause for dramatic emphasis. ‘If only you small girls would listen to me I would make of you the crème de la crème’. This was what everyone had come to hear and they weren’t disappointed. Many of them seemed to have the sentences off by heart and lip-read along with her. Here was Muriel Spark in person, the native returned, witty, waspish, a wonder to behold, the true crème de la crème, reiterating more than once when quizzed about her ‘exile’ in Italy: ‘I consider Edinburgh as my home’.”

Taylor’s fine portrait of Spark, a must-read, points to her “sense of fun and her ferocious artistic ambition” and how, in every respect “she had lived life to the full”. It is only fitting that her final resting place is in San Giovanni, where she found a lasting home. “As is typical in Italy”, Taylor reminds us, “many of the graves are adorned with snapshots, Muriel’s nearest neighbour is a man who is remembered not as in the fullness of youth but in his toothless dotage. She is one of the cemetery’s few non-natives. Her stone, placed flat, has no photograph. It has two pots of flowers and a candle. The lettering is weathering already. There is a quote, chosen by Penny, translated into Italian from Muriel’s own poem, Canaan: ‘Not a leaf/Repeats itself, we only repeat the word’. And immediately beneath her name is one simple word, Poeta.” As an artist of the first rank, Muriel Spark is one of those writers who, once encountered, like Elizabeth Hardwick or Eudora Welty, are never forgotten; they become part of the atmosphere in which one lives and breathes.