The disappearance of the Protestant accent from Ireland 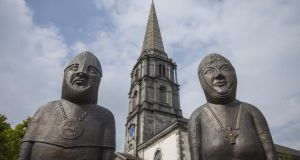 A mischievous memoir by Malachi O’Doherty is titled I Was a Teenage Catholic. Those of us who were teenage Protestants in the 1960s must feel a similar sense of an era being dead and gone. Growing up as a Protestant in Waterford city, which was something of a time warp in itself, I was struck by the remnants of what had once clearly been a purposeful Protestant world.

Besides the stately Georgian cathedral designed by John Roberts, surrounded by a Trollopean townscape of deanery, widows’ apartments, and Bishop Foy’s school, there was a smorgasbord of non-Catholic places of worship: smaller Church of Ireland temples (St Olaf’s, St Patrick’s), Presbyterian churches, establishments for Baptists and Methodists, and a strong Quaker presence centred on Newtown School (founded in the resonant date of 1798).

As the years passed, these minor establishments contracted, closed or combined, though the Quakers are still there, in a meeting house built when other halls were closing. Roberts’s cathedral is beautifully restored, but is now the centre of a museum quarter.

This may be emblematic – or not. In recent decades, Irish Protestantism has received several shots in the arm from unlikely sources, including both immigration and the input of disillusioned ex-Catholics during the era of scandalous revelations. A period of reassessment and cautious restablilisation began with the establishment of the Irish Free State; by the 1970s, the sense of difference between Protestant and Catholic cultures in the Republic was eroding fast.

To understand this, it is necessary to examine the social and cultural identity and existence of the Protestant common people rather than the decaying world of Big House grandees explored by novelists such as Elizabeth Bowen and Molly Keane. An absorbing book is shortly to be published on exactly this subject: examining inter alia what lay beneath causes célèbres such as the Fethard boycott or the Tilson affair, drawing a fascinating picture of rural Protestants passionately affiliated to GAA games, reminding us that there were Protestant republicans and revolutionaries, and exploring the theme of Protestant influence in the commercial world.

The picture that emerges is not that of an Irish “establishment”, or at least not in the oversimplified sense in which that concept is sometimes employed.

Protestants in the Free State and Republic did not occupy the ghostly position of “former people”, in the poignant phrase applied to ci-devant Russian aristocrats after 1917. Rather, they remained an element in Irish life whose Irish identity is unequivocal and who did not share the uneasy feeling of ill-gotten historical privilege delineated in Bowen’s autobiographical writings.

Even within the fortress of Trinity College, the sense of an “anti-national” identification seems an invention of nationalist zealots rather than a reflection of the place itself (which Éamon de Valera seems to have held in more affection than he did UCD). There may also be more to say about the complexities and snobberies within the Irish Protestant community: hints can be picked up through mordant asides in some of Hubert Butler’s essays on the subject, such as Portrait of a Minority.

Had the declaration of a Republic followed hard upon the new Constitution, reactions might have been rather different

But “the Protestant accent”, if anyone even remembers it, is now gone (along with Protestant cuisine – an unregretted subculture of a subculture). And the notion expressed in Brian Friel’s uncharacteristically maladroit play The Home Place – that Irish Protestants, since they are the descendants of settlers, carry within their DNA a longing for a “home” in England – does not hold water. Closer to the truth is the fact that Irish Protestants were expert in keeping themselves warm in cold houses.

It is also important to recognise the importance of the nature of the slow, even tentative progress of the new Irish state towards full separation from Britain: because the development of a secure Protestant identity within independent Ireland was facilitated by the gradualist schedule whereby independence was formally achieved.

The fact that the Free State was a dominion within the Commonwealth softened the impact of absorbing its nationalist rhetoric and semi-theocratic adoption of Catholic social teaching; even de Valera’s 1937 Constitution could be accepted more easily since by that date he was no longer seen as a demonic Lenin-type figure, even by the most nervous of Protestants. Moreover, the rights of non-Catholics within the pale of the state were (at least formally) recognised in the 1937 document.

Had the declaration of a Republic followed hard upon the new Constitution, reactions might have been rather different; but again, there was a cooling-off period of 11 years before John A Costello’s initiative cut the links to the Commonwealth. By then, the identity of southern Protestants was more or less uncomplicatedly Irish.

The word “southern” is important here, and by 1948 the contrasting experiences of both parts of Ireland in the second World War had driven the wedge of differentiation far and deep between Protestants north and south – a syndrome which continues to this day. Research on the attitude of rural Protestants towards the GAA emphasises the marked contrast in Protestant conceptions of the association north and south of the border.

I am reminded that as provost of Trinity in the 1970s, FSL Lyons gave a splendid reception in the provost’s house for the winners of the All-Ireland football final; it would be hard to imagine such a thing happening in the Queen’s of the day. Around the same time, the great Trinity botanist and all-round intellectual DA Webb, who came from a distinguished Irish Protestant family (his mother Ella Webb was a pioneering medic and feminist), was routinely describing himself as a “26-county nationalist”. This was, I suspect, a pretty general response in the Irish Protestant world, and it could only be accentuated by observing the horrors developing north of the border after 1969.

Protestants in the new state accounted for far more than senators, captains of industry and landlords

The previous era had seen the slow accommodation of Irish Protestants to a new world, where they had at first feared becoming what the historian Ian d’Alton resonantly calls “a beached people”. This did not happen, nor did they withdraw into “inner emigration”.

Actual emigration was another matter, especially in the early 1920s: statistics show that Irish Protestant emigration was disproportionately extreme in this era, unsurprisingly peaking in 1921-1922. Recent historiography has confronted the ugly theme of intimidation and terror inflicted upon the minority, which certainly existed in some areas; but loyalism seems to have been at issue more than sectarianism.

Detailed examination of the nature of Protestant emigration after independence emphasises economic reasons, such as the cumulative change in land-holding patterns under the land purchase Acts, the decline of Big Houses and garrison towns along with the employment opportunities they afforded, and the perceived unattractiveness of the new state’s Gaelicisation policies. But these reactions did not apply to all sectors of the Protestant community, which retained a good deal of its economic power, and was (at least at the outset) over-represented in the Senate.

In any case, Protestants in the new state accounted for far more than senators, captains of industry and landlords. While WB Yeats’s great philippic in the Senate about his tribe’s contribution to intellectual and cultural life is a vital statement of unashamed Protestant Irishness, it is worth remembering his brother Jack’s salty aside that the Yeats family “had no gate lodges or carriage drives”.

This applies to the majority of Irish Protestants; even the third Baron Glenavy, better known as the humorist Patrick Campbell, came from middle-class legal and shop-owning stock. Campbell’s autobiography, My Life and Easy Times, published in 1988, broke a cardinal rule by insouciantly quoting the slighting way his parents used to refer to Catholic mores. But the interesting thing is that, by then Campbell felt he could break this rule.

It is of a piece with the determination of the late Victor Griffin, legendary dean of St Patrick’s (1968-1991), to “rock the boat” as much as he could, by emphasising the unashamed position of Protestants in Irish public life, and announcing (in the campaign against the anti-abortion amendment in 1983) that Ireland “had to choose between republicanism and confessionalism”.

This indicates that by then Irish Protestants were breathing a freer and healthier air. In the previous era Hubert Butler, another great advocate of rocking boats, used to bemoan the caution of the mid-20th-century Irish Protestant mind. In the 1950s he described the Church of Ireland as “a poor old phoenix, moulting and blind and bedraggled, gazing mesmerised into the fire, but unable to summon up the courage to take the last leap”. Yet, he continued: “I still think it has the power to lay a very fine egg.”

The forthcoming book significantly called Protestant and Irish shows that a certain vibrancy and combativeness persisted within the ostensibly dusty and downbeat image of southern Irish Protestantism. Though the Protestant accent may have vanished, we can now recognise that newly-independent Ireland in the 20th century was characterised by a Protestant intonation, and was all the richer for it.

Protestant and Irish: the Minority’s Search for Place in Independent Ireland, edited by Ian D’Alton and Ida Milne, will be published in early March by Cork University Press