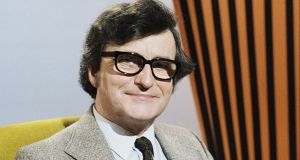 Arthur Murphy: Born June 4th, 1928. Died February 7th, 2019 Broadcaster Arthur Murphy has died in his 91st year after a short illness. Murphy was above all versatile. As a broadcaster he was always a freelance, and always able to make a living. He often presented himself to the public as not taking himself seriously. He always took his work very seriously.

He was best known for his decade and a half presenting Mailbag on RTÉ television. This had begun as a 10-minute weekly filler for three weeks. Murphy made it his own with an individual and eccentric style, and self-deprecating humour.

Murphy succeeded because he was an all-round professional. In the early 1980s a producer on RTÉ Radio 2 surprised many in the station by choosing Murphy to present Midnight Blue during the regular presenter’s absence.The doubters thought Murphy was the opposite of the young, cool station that was Radio Two. Murphy proved them wrong because he had a marvellous radio voice; could be animated; and, while he may not have known the contemporary music very well, he could interest listeners in it.

At 82 he delivered a stunning version of Ruby Murray’s Softly Softly as encore to a concert in the National Concert Hall, accompanied by Duke Special on the piano

When he was in his late 70s his career took off again. He spent a decade presenting E Mail Bag as a slot on the Ray D’Arcy Show, first on Today FM, then on RTÉ Radio 2. This was intended as just a one-off item for one show. Immediately it was so popular it turned into a weekly slot.

It was old-school radio in the positive sense. A team gathered round the microphone with Murphy in the chair. It connected with the average Radio 2 listener who was in their early 30s. Murphy was half a century older.

For the slot he developed the persona of a somewhat louche frequenter of nightclubs. He enjoyed that pretence. It was contrary to the private man, a strong member of the Church of Ireland, active in his parish.

He had yet other talents. He worked on the RTÉ Guide doing the “billings” – the short synopsis of programmes on the schedule. He was a pianist and organist. At 82 he delivered a stunning version of Ruby Murray’s Softly Softly as encore to a concert in the National Concert Hall, accompanied by Duke Special on the piano, and despite having a broken arm.

He was born Arthur John Murphy in Dublin’s East Wall in 1928, the elder of two sons to Jack Murphy and his wife Mary, known as “Teesie” (née Hayes). His father was a Dubliner and a mechanic, and his mother was from Co Meath. From an early age he was a chorister in Christ Church Cathedral. After national school he attended Christ Church Grammar School, then Trinity College, graduating with an honours degree in history and politics.

After Trinity, ambition to succeed as a singer took him to England. While seeking success, he taught for a while in London’s East End. He signed a recording contract with George Martin, later to produce the Beatles. As a singer, he appeared on both BBC and ITV. He also moved into presenting on several commercial radio and TV stations. Early in his singing career, a TV producer wanted him to adopt a stage-Irish appearance for a broadcast. He absolutely refused, and the producer backed down.

The establishment of RTÉ television drew him back to Ireland in the early 1960s. He presented Visitors Book, the station’s first chat show, and also worked as a producer/director.

He then returned to Britain for a few years. He combined TV and radio broadcasting, and producing several documentaries, with a recording career under the name Mark Dwayne.

In the mid-1970s he returned permanently to Ireland. He wanted more time with his family. For him, they came first.

He is survived by his sons Shane and Mark. He was predeceased by his wife Patricia and brother George.

Suffering from Covid-19 beard? Here’s how to tame it
10