Michael Harding: I wanted to warm my arse in freezing Warsaw. So I went to church

I find it consoling to contemplate death, not as an ending, but a transformation 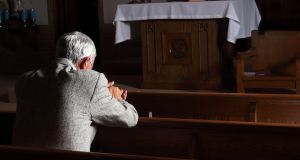 “I relish the ambiguity of quiet churches, the candlelight and shadow” Photograph: istock

This time last year I was wandering around Warsaw in a freezing fog on half deserted streets, observing furry hooded strangers, with their shopping bags and dainty purses, as I brushed against them in the doorways of TK Maxx, or Carrefour, or on the white floortiles of the Arkadia Shopping Centre.

I went to Arkadia regularly, just to thaw out with a cup of hot chocolate. And it was nice to have somewhere to go, although sitting in cafes was expensive. All I wanted to do was warm my arse. Which is why eventually I turned to churches. Many of them were heated all through the day.

Wandering the cobbled streets I would keep my eyes peeled for the big iron doors of ecclesial grandeur, just to sit in a pew for half an hour, gazing at nothing in particular.

The only intrusion on this agnostic ecstasy in the churches of Warsaw was the occasional cleric, swaggering up the aisle in a black soutane, swinging a bunch of keys, who would eyeball me and try to size up whether I was a true devotee of the Christian god, or just a homeless vagabond looking for heat.

They say old people get more definite about everything as they age, developing convictions as hard as the cement in their arteries. But I seem to be the opposite; the older I get the more bewildered and uncertain I become about all religious dogma.

From my vantage point in the back pew of a Polish Church, the universe gets ever more nebulous from one year to the next. Although that’s not something I’d want to confess to a Polish priest.

The days of being afraid of clerics in Ireland have long gone, but there were a few occasions in Warsaw when I felt slightly uneasy beneath the clean-shaven gaze of some young clerics.

For example on one occasion, and purely out of curiosity, I followed a street demonstration in which the ONR played a prominent role. The ONR is a far-right organization with roots in the anti-Semitic and neo-Nazi movements of the 30s, and the uniformed members on the march were as thin as whippets and looked not unlike young curates, in their black shirts and trousers. They carried large green flags emblazoned with the heroic emblems of their organization, and they stood as stiff as paratroopers when standing to attention.

At one stage, some of the ONR leaders mounted the back of a lorry, and spoke with loud hailers to the crowd. I didn’t understand a word they said, but they certainly weren’t exhorting the crowd to reach out a hand of love and friendship to strangers.

That didn’t bother me. I was too absorbed in taking photos on my phone. But what I found chilling was the sight of two young priests in black soutanes, clean shaven and neat, with dainty black backpacks, standing in the front row beside the ONR lorry, and applauding all that was being said.

One of them even flaunted a rosary beads in his hand, perhaps to demonstrate how neatly politics and prayer can be intertwined. Which is comical when one remembers that it was a Polish pope who wagged his finger at liberation theologians on the basis that there ought never be any fusion of politics and prayer.

Not that any righteous young cleric or ONR brigade could stop me loitering in churches, or dispel in me the hope that death might be a final embrace with a loving creator. I find it consoling to contemplate death, not as an ending, but a transformation; I’m just not certain anymore about how to put words on all that. Silence seems to be the only option.

And I relish the ambiguity of quiet churches, the candlelight and shadow, the incense and even the garish statues. I love the empty sanctuary and the echoing footsteps. It all brings me back to my childhood when god was a bit like mother; I went to bed, knowing she was in the next room, out of sight, but never far away.

I doubt if that would hold up as an adequate theology in modern Poland where clerics are becoming more and more clench-fisted and definite about the naming of things.

And if anyone had asked me why I was sitting in the back of a church in Warsaw, I would have been stuck for words. Because, as the Asian proverb says, ‘When you name the bird, you cease to experience the song’.