‘I hadn’t been in real school until I came to Ireland. It’s nice being normal’

New to the Parish: Ismail Ahmed arrived from Sudan, via Libya and France, in 2017 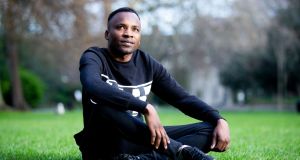 Ismail Ahmed arrived in Dublin in August 2017. He is now in fifth year and plans to do an apprenticeship after his Leaving Cert to become a mechanic or electrician. Photograph: Tom Honan

Four people drowned off the boat Ismail Ahmed crossed the Mediterranean in. Then 15 years old, the young teenager had not yet heard the horror stories of the many thousands who died while making the same journey from Libya across the sea to Italy. He did not own a phone and did not read the news. All he wanted was to find safety. So when one of the young men who had travelled with him from Sudan recommended he make the crossing, Ahmed agreed.

“We were like 10 hours in the sea. It was when people saw the big EU ship in the distance. Everybody stood up shouting ‘I want to go first, pick me!’ Then they fell inside the sea and they drowned. Sometimes when I close my eyes and think of the past, it’s very sad and stressful.”

Now 19, Ahmed sits in a bustling city centre coffee shop as he describes his journey from Sudan to Dublin via the streets of Paris and migrant camp known as the Calais “Jungle” in northern France. He left Sudan in 2015, following a group of young men in their 20s who said they were travelling north by bus. Having lost his parents at an early age and grown up in a camp for internally displaced people, Ahmed had nothing keeping him in the country.

In Libya he discovered a deep hostility towards black African migrants and the men who had accompanied him from Sudan insisted he remain inside. “They were working and told me don’t go out, you are so young. So I sat at home. It was very tough. It was the feeling that you don’t have the right to do anything; to feel free.”

Having crossed the Mediterranean, and upon arrival in Italy, Ahmed was separated from his older friends and sent to a hostel for unaccompanied minors. After a few days, he says the owner of the premises asked for money, so he left and jumped on a train heading to France. Asked if he was trying to get to any particular European country, Ahmed replies that he was “just looking for safety”.

“My plan when I was in Sudan was ‘I wanna live anywhere’. Just to find a safe place where I could have a good life.”

Following another group of migrants, Ahmed ended up on the streets of Paris where he says he slept rough in the Porte de la Chapelle district, not far from the cobbled streets and quaint French bistros of Montmartre. All this time he wore one set of clothing – jeans and a large jumper. He spent nearly two months in the French capital, relying on the kindness of volunteers for food and a sleeping bag.

“It was very bad because you’re sleeping under the bridge, you’re homeless. It was winter and there was a lot of rain during the night. People would be fighting, it was really dangerous. There were so many people there.” Ahmed decided to continue his journey north after meeting a man who told him about a camp with tents and sleeping bags in a city on the northern coast called Calais.

He spent the following seven months living with a group of Sudanese migrants in the infamous camp. Like many others at the camp, he tried to make the crossing to England a few times by jumping into lorries waiting to pass through the channel tunnel. However, this ended when he saw a young man fall off a truck and die.

“He was under the lorry and it was very cold. He had probably been hanging on with his hands for a long time; eight or nine hours. Then he fell and died. So I stopped trying.”

A few months after settling in the camp, Ahmed met an Irish volunteer Caoimhe Butterly. “I asked her where she was from and she said Ireland. I didn’t know where Ireland was but I asked if I could go to her country. She said she would try to help me. She didn’t promise but she said she would try.” Butterly took Ahmed’s photo, wrote down his details and said she would keep in touch.

In October 2016, French authorities demolished the camp. Like many others, Ahmed returned to Paris. Unbeknown to the Sudanese teenager, a few weeks later the Irish Government announced it would accept up to 200 unaccompanied minors from the former migrant camp in northern France.

Conditions in the Parisian makeshift camp were bad, and Ahmed was eager to move on. “I had no money for something to eat or drink and nowhere to sleep. I saw a lot of people in the same situation as me. It was unbelievable but when you see it with your eyes you will believe it.”

After a month back in Paris, Ahmed received word from the Irish volunteer, Butterly - she had kept in touch in the intervening period - that he had been selected to go to Ireland. He was temporarily moved to a centre for teenagers in Toulouse and then moved again to Bordeaux. As the months went by, Ahmed struggled to believe he would make it to Ireland. He was visited by an Irish social worker and an official from the Irish Government but still could not believe that he was leaving France.

He arrived in Dublin in August 2017 and was taken to a hostel for unaccompanied minors where he spent the following six months. He was then transferred to a foster home. At first he struggled to sleep and found his mind was plagued with memories of his journey from Sudan.

He attended English lessons for his first few weeks before transferring into fourth year. “It was hard for me because I didn’t know anyone and I hadn’t been to a real school in all my life. But the teachers introduced me to everyone and the second day the students started talking to me. They’re very good friends now and help me with things I don’t understand. It was very nice being normal, someone who was just normal.”

Ahmed is now in fifth year and lives with a foster family in Dublin. He is one of 41 young people who have come to Ireland as part of the Government’s Calais Special Project. He has worked part time in construction and in a coffee shop and hangs out with friends on the weekend. He hopes to do an apprenticeship to become an electrician or mechanic after his Leaving Cert.

“Then I’d like to start working, proper work, and maybe get married and have kids. I want to have a life here, a new life.”

Mental health: How to mind yourself during the shut-down
5