Mary Jennings started running with a few minutes at the end of a walk, but the exercise ended up completely changing her life 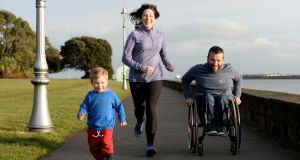 Mary Jennings is a bit of an evangelist, and she might just have hypnotic powers. Don’t get this wrong: she doesn’t go around singing and waving her hands in the air. And it’s not because she is so clearly enlivened by running in the outdoors (although she is, and that enlivening is infectious).

It’s more that she embodies a clarity of thought, and a very attainable, gradual version of giving-it-all-up-and-making-a-new-life for herself. That too is infectious.

The running coach - and Irish Times columnist - started her professional life in 2000 as a consultant with PwC, designing IT systems all over the UK. She paints a picture of her 20s self: hard work, long hours, lots of travel, great challenges and great money. She was away from base on projects for months on end - in Bath, Warwick, Glasgow. Her long term prospects were brilliant. In the serendipitous way of things, some friends ran - the hobby-running scene was further ahead in England (“over here, if someone passed you running, they’d offer you a lift”) - and she tagged along. What started as running for the last few minutes of a walk, and a social life around running, gradually towards 5K, and ultimately the London marathon in 2005. But she still didn’t consider herself “a runner”.

Aged 27, in a corporate career path workshop, she drew up a plan for her future, mapping where she wanted to be in five years, 10 years, and so on towards the ultimate goal of partner. And she realised making partner didn’t interest her at all.

“I could see the lifestyle that would have been planned out for me” and it was “defining what I don’t want to be”. As she tells it, it wasn’t a eureka moment, but the process “planted the seed: that this isn’t a job for life”. A couple of years later when the chance of a career break came up, she grabbed it.

She never returned. Her story is one of transformation, but in cumulative steps. Out of interest rather than as part of a grand plan, during her career break she did a personal training course. The decision not to go back after her break “was easier after a year out, and not that daunting. I knew there were options.”

So running changed my life

She moved home to Ireland 2007, still looking for more control and balance- time to run and time to work. She did consultancy as a contractor in functional design, bridging business needs and technical IT coding, for three days a week, which left plenty of time for running - still a hobby, not yet an alternative career. What started as helping a few friends with getting into running, and sharing her knowledge, led to running classes as a sideline. The hobby gradually grew into a more structured sideline, Forget the Gym, and eventually she quit her the contracting in 2012.

In her story, you wonder did running change her life, or did she use running to change her life? The answer is both: running gave her the confidence to change things, and was the tool with which she changed things. “Running has changed my perspective on being sporty or not sporty. I would probably never have done any sport as an adult if it wasn’t for running, because running was accessible to build up gradually. So running changed my life. And it changed my perception of myself: the feeling ‘I can’t do this’ is thrown out the window with running because you can achieve things that seem impossible if you put your mind to it. So running gave me more confidence in myself, and that transfers to other areas of your life, like work. You feel: maybe I could do something different. Who’s to say, if I wasn’t running, I probably wouldn’t have taken the career break and trained at coaching. Having the running behind me gave me the confidence, and having the knowledge allowed me to use that to develop the running material. The research and passion you build up for a few years was the starting point.”

Along the way she found love through running too, in a way. She and John Fulham met as colleagues when she was contracting in AIB. He was an athlete too, but more competitive (“he can’t understand how I can take photos when I run a marathon”) than her recreational running, but “he understands the dynamic”. A four time Paralympian, he was a wheelchair racer over 100m and 200m, with European and national titles, won the Dublin marathon three times, and played on the Irish wheelchair basketball team for 14 years.

Something in the ether must have infected him too, and after 22 years in a sensible job at AIB, he too jacked it in. These days he works in corporate fundraising with the Irish Wheelchair Association and is president of Paralympics Ireland.

They bonded over an interest in running; though he had retired from racing he trained for the 2010 Dublin marathon with her, to woo her. They married in 2014, and a couple of years later had Harry.

You can take the woman out of project management but... As Jennings talks about how she changed her life, from business consultant to Forget the Gym, she pulls out a napkin to sketch a timeline. Her project management background was perfect both for strategising a business, and for building running and training regimes. It was “like a project for myself”.

Along the way she built up more expertise, including training as a chi running coach and a Master’s in sports and exercise psychology, when she finally cut the cord left contracting altogether.

“So much about running is in our heads, and motivation is half the battle.” Her thesis looked at what makes people more likely to continue running: two crucial factors are running with someone else and having a training plan or diary.

These days the family lives in Donabate, and two year old Harry is “quicker on his feet than both of us”. She coaches and leads workshops and regular running classes, including on Sandymount and Clontarf seafronts, as well as running holidays and day trips , and writing fortnightly for the Irish Times. And now she’s written Get Running (Gill Books), a sort of manual that makes running, and changing your life, attainable for the new runner, lapsed runner and the regular runner.

Her methodical approach looks at what people want to achieve, and how to do it to suit the individual’s aspirations and abilities. Her advice and inspiration is a sort of outdoor, physical self-help: “I love the fresh air and clarity and freedom” of being outdoors”, and “my best ideas - including for the column - come to me when I’m out for a run.” Getting outside at whatever pace is right for you today is the best thing you can do to enhance your life, she says. The aim is to feel better not to run faster. Oh yes, evangelical.

And still she says: “Even now I don’t consider myself a real runner.”