Ruth Fitzmaurice: ‘My husband died but I still believe in magic’

I buried our wedding delph in the garden. The act of planting was all the help I needed 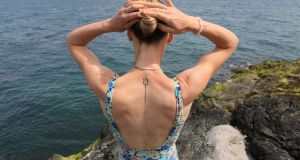 Ruth Fitzmaurice at the cove in Greystones. Photograph: Nick Bradshaw

I planted my wedding delph in the back garden. All of it. Plates, glasses, saucers, cups, soup bowls. I stuck each one in the ground. “Why on earth would you do such a thing?” some will ask. Others won’t. Heads hung low, their hands know all about planting. Give a nod and dig deep. These fingernails are filthy. Let me explain why.

Our wedding delph was precious. My husband, Simon, and I went to the fanciest shops for the choosing. We decided plain was best because we were pretending to be grown-ups. Patterns might get too tired. We settled on some fine porcelain white and then probably went home to have amazing sex.

Behold, this was love and we called it the deep magic. We gazed upon it in awe, at each other, into every bit of it. When two souls are so delighted to be in each other’s company, they feel like better people. The world is more colourful. Nothing can touch such staunch believers. You are destined for happy ever after because you have never felt so happy. Dig deeper.

Our fine delph, full of possibilities, gathered dust in a matching dresser for 10 whole years. It got forgotten in favour of little people at first. Then one day forgotten things could never be remembered again.

Four years into our marriage, during the chaos of two small boys and another on the way, my husband was diagnosed with motor neuron disease. He was given three years to live. The years limped on. He ended up not dead, but living at home on a ventilator.

The delph started to annoy me. It weighed heavy on my soul. The dresser and I began avoiding eye contact. Sometimes I fantasised about smashing it all against the back wall, but the anger didn’t last. Delicate souls and dinner plates need a much gentler hand.

Maybe my dresser was unhinged. I don’t know. I leaped from the couch one night quite spontaneously and started planting in a silent frenzy, running back and forth from dresser to garden, sticking plates in the ground with the lightest touch.

I worked head down in the dark for at least six place settings before stopping. Under lamplight, I stood back to survey my handywork. Then I gasped because it was beautiful. Plates like large moons glinted in the half light, crystal goblets upturned in the earth like flowers. It was my own art installation. Call it “contemplate”.

There was no badness in what I did. Quite the opposite. No delph was harmed in the making of my back garden

I took my sensible son out the next day for a look. He saw my eager face and nodded sagely, knowing something about this might be considered wrong. So he waited until I left the house and took my mother-in-law out to the garden. Naturally she was upset. “Your mother shouldn’t have done that,” she whispered, shaking her head.

I could have explained. There was no badness in what I did. Quite the opposite. No delph was harmed in the making of my back garden. One glass got a bit cracked the next day but that was it. No broken pottery at all.

I didn’t do it to hurt anyone or look for attention. It wasn’t a cry for help. The act of planting was all the help I needed. I should have explained, but we never spoke of such things.

My own mother arrived the next day and took it all away in big plastic crates. She put it under the bed at her house, muttering that I might want it back one day. “No I won’t,” I said firmly, knowing I really wouldn’t. Things are just things, my granny used to say, but we attach such importance to them. The wedding delph got planted and the dresser lay bare. I was unburdened. Wedding wishes would never come true.

Since then Simon, my husband, has died. He was set free from a body that didn’t work anymore. We miss him. I still live with my five children in our home by the sea. We bought a new dresser and filled it with everyday things.

Most days I collect sea pottery at the cove where I swim. Greystones beach might look grey and stoney from afar but step a little closer, you see colour. Seaglass shines on the shore. Fragments of pottery, some plain, some patterned, reveal themselves to the gleaning eye. A blue ripple of a piece flashes hello from the water’s edge. This patterned tiny vignette has been rounded by time in the waves. Tiny cracks branch like tributary veins. I laugh out loud. Magic is real I tell my son (the sensible one) and he nods, because he knows it’s real and that it’s right here.

Sea pottery is my new obsession and has possibly turned me into a weirdo. I see signs in the intricate patterns, solve deep mysteries among the cracks and grooves. I get this strange strength from the stuff. These broken pieces used to be dinner or side plates, soup bowls or teacups. They could have been somebody’s wedding delph, not just the boring plain kind. The sea has shaped them into something else and the patterns never grow tired. Often they take my breath away.

The sea is a mighty stunner. A shadowy, nebulous shape shifter. You can never fully trust the sea. Wave after wave, thrown around in the surf, broken things are at its mercy. Edges blur, original patterns fade, always some new detail to reveal in delicate relief. The longer I swim here, I see it’s shaping me as well. Throw me around then, sea. Turn me into a battered chunk of blue willow. Wouldn’t that be nice.

My husband died and love was lost, but I still have that staunch stubborn belief in magic. Like it’s worth pursuing, trying, worth getting your heart broken, worth every goddamn risk of human existence. It is worth it to me. My collection of sea pottery proves it. Maybe. Who knows for sure? Real magic is uncertain. Stop digging. You can never really explain why.