I Still Dream review: The troubled world of a 17-year-old 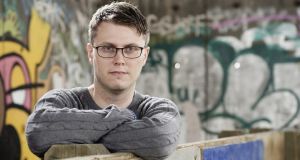 James Smythe: uses code-building metaphors to explore the construction and erosion of self

The isle is full of noises, says monstrous Caliban in Shakespeare’s last, saddest play, The Tempest. Sounds and sweet airs that give delight and hurt not. Substitute “isle” with “I’ll” (I will, a statement of conscious intent) and there, in thumbnail, is the pivotal character of James Smythe’s equally sad, beguiling novel. For this intelligent being – who may, or may not, be the “I” of the title – is also full of noises: whirrings, clickings, spinnings that resemble “hesitancy”, cicadas or breathing; “weird hum[s] of light’; “the noise of the world itself taking off”.

The world I Still Dream opens into is a bedroom. It’s 1997: 17-year-old Laura Bow is a troubled soul, given to self-harm, creating mixtapes and calling herself “a dick”. Her dad left home when she was seven and her harried historian mum now lives with the well-meaning, ineffectual Paul. Laura has a best friend, Nadine, who she talks to for hours on the phone. No, strike that. Laura has a best friend, Organon, who she talks to for hours on her computer. Organon, named after a Kate Bush song loved by Laura and her missing dad, is an artificial intelligence, designed by Laura to listen, empathise and learn.

From the off, Organon is intriguing, and Smythe evokes the lost grace of analogue technology with originality and aplomb, but teenage Laura’s narrative voice feels a tad prosaic. Easy to dismiss as middle-of-the-range YA, with a smattering of Nick Hornby courtesy of the mid-1990s playlists. Then, 20 pages in, three things happen. The tech noises of Laura’s world start developing an insistent, purposeful quality; dodgy Mr Ryan, a failed coder turned teacher, takes a suspicious interest in Organon; and we realise that Stub, Laura’s cat, has feline dementia. And we’re in: following the delicate thread Smythe has woven through layers of a story that, like Laura’s mixtapes, is more than the sum of its parts.

On the surface, this is a thriller about big business and power. Within that, a speculative piece, imagining how we might develop artificial types of intelligence, and its consequences on our world, society and existence. Around this, an origin tale of a daughter seeking a lost father and, through him, herself. And underneath these, a love story told by an unexpected Romeo from a threshold near death, as he imagines/remembers his Juliet eternally alive.

Where does information end, knowledge begin? At what point, does data stored in memory become life? What’s the purpose of learning: to dominate or serve? In exploring these questions, I Still Dream evokes the magisterial Season One of TV’s Westworld, and Smythe is as on-point on the nerdier aspects of the tech industry as Silicon Valley. All this is gorgeous, and fun. But, like Westworld, I Still Dream digs into even older questions, ones that have haunted the western European imagination since Calderon and Shakespeare. What am I, and how do I know this?

Like 3D-rendering software, the novel’s structure lets us approach from different viewpoints, shifting time, place and narrator. So much of the reading pleasure comes from happening on these voices without initially knowing where we are, or who’s talking. We’re plunged into a narrator’s head, asked to trust them, spend time with them, get to love them. Then they’re gone.

Though, in a way, they’re not.

Because over the course of the novel, each viewpoint recurs: some literally, some not. Iterating, updating, degrading: Smythe uses code-building metaphors to explore the construction and erosion of self, and with each recurrence, his central theme grows in resonance. Just as poor Stub “forgot to be the cat he was before”, later, somewhere else, Mr Tan will – at an awful moment at a family outing– make “the sound of a man realising there’s a gap in what he knows”. And Tan’s inevitable degrading is echoed again, and again, bringing us to the deep, heartbreaking core of the novel.

It doesn’t matter that some of the thriller action climaxes less in a bang than a whimper, or that Smythe’s villains – even SCION, the sociopathic Cain to Organon’s Abel – are more sad than bad. I Still Dream isn’t Terminator, or even Blade Runner, but a beautiful mixtape about what it is to be human, and alive, and to love another more than oneself. Still more fundamentally, it’s about that one thing we’ll never know, despite all our cleverness – what traces we’ll leave on the memory foam of existence when we’re gone.