Poem of the Week: Yeats at Renvyle

A poem by Patricia McCarthy 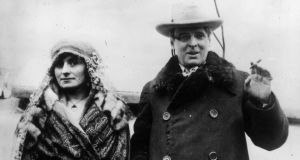 The poet WB Yeats and Georgie Hyde-Lees spent their honeymoon at Renvyle House, the Connemara hotel known as “the silver-grey house”. The “pirate queen” is Gráinne. Hers is Maud Gonne’s face

The bells of fuchsia, asphodel, bog-heather
swung their reds, oranges and purples in concert
as he drove up with his bride to the house
silvered by rain. The Twelve Bens stood by:

old hands at witnessing weddings of land, sky
and sea, the golden shore like a section
of some god’s own ring that could never wash
off the turf’s swollen finger. Everything here

was legible to him: the thorn trees bent
into humble cursives by the gales, lugworms
squiggling alphabets in thin casts; the tides,
high and low, writing their own tables

on rocks as they carved the coast into scriptures
stripped of denomination. Inside, hands shaken,
the papered walls started to speak of flames,
ashes, re-buildings; and of the fists

of the starved hammering against them
for fish, a shiver of grain. His wife, picking up
a whisper of some pirate queen married
into the Connaught clan who owned the site

before the settlers, heard her slam down
the notes of the tenor’s Steinway grand.
And a cold gust riffled his hair. Despite
the welcome, a boy made of air stood

over the self he had strangled by a pillar
in the North parlour. Worse, a face appeared
at the window, high cheek-boned: hers,
ghosting the infidelity in his head.

As the islands: Omey, Inisboffin, Achill,
Clare swapped places, did disappearing acts
under his gaze, the mountains wept his tears –
of lichen – down their marbled sides.

Convivial at dinner, he sank in secret
into his heart’s quicksands, the long room
in his mind filled with an Atlantic that lent him
the balance of its buoyancy on a salt tongue.

Patricia McCarthy is editor of Agenda and won the National Poetry Competition 2013. Her collections include Rodin’s Shadow, Horses Between Our Legs and Letters to Akhmatova. Trodden Before is due from High Windows Press this summer and Rockabye from Worple Press in September