An Post takes over as Irish Book Awards sponsor 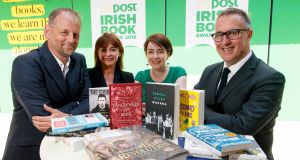 An Post has signed a three-year headline sponsorship agreement with the Irish Book Awards. Now in its 13th year, the awards bring together the entire literary community – readers, authors, booksellers, publishers and librarians. This year, a new Irish language category, the Love Leabhar Gaeilge Irish Language Book of the Year, is being added to the roster of awards, including Novel of the Year, Children’s, Cookery, Crime Fiction, Popular Fiction, Nonfiction, Sports, Short Story, Poetry and Teen and Young Adult.

David McRedmond, CEO of An Post, said: “At the heart of An Post is the written word, and we are honoured to be able to sponsor the Irish Book Awards. Books connect people as An Post connects people, and we share is a love for connection and community. ‘Readers Wanted’ is the cry of the Awards this year and we will support this across our business with enthusiasm and creativity.”

The winners of the Irish Book Awards are announced at an annual awards ceremony in Dublin every November. Submissions are now being accepted via irishbookawards.ie. The closing date for applications is September 7th.

In Ticket in Saturday’s Irish Times, Seamus Heaney’s children talk to Deirdre Falvey about how choosing 100 poems from over the poet’s career was weighted with personal resonance and memories, plus a first look at how the National Library has spun thousands of items from his archive into a new exhibition. Kit de Waal discusses cultural appropriation; Outlander star Caitriona Balfe talks to Paul Lynch about his novel Grace, this month’s Irish Times Book Club selection; we publish June’s Hennessy New Irish Writing winning short story and poems; plus Caroline O’Donoghue on How to be Famous by Caitlin Moran; June Caldwell on Crudo by Olivia Laing; Tony Clayton-Lea surveys the best new books on music; Sarah Gilmartin on Convenience Store Women by Sayaka Murata; Neil Hegarty on The Shepherd’s Hut by Tim Winton; Chris Kissane on Stacking the Coffins: Influenza, war and revolution in Ireland, 1918-19 by Ida Milne; Julie Parsons on One Day in the Life of Ivan Denisovich; and Sean Hewitt on The Cambridge Companion to Irish Poets edited by Gerald Dawe.