‘Baby bathed and quiet, I once again assume the mantle of murderess’ 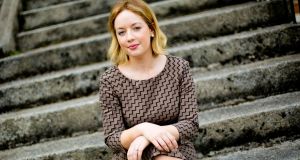 Cloistered away, all alone in a garret, in splendid isolation. That’s the dream. I would survive on chicken soup and bourbon creams passed in on a chipped enamel tray.

Toiling at a heavy mahogany desk, well-stocked with goose quills and hand-blown glass vials of lampblack ink, I would unsheath an Olympia typewriter from a dusty cover on the most inspiring days.

And I would write, the words and infinite white canvas slowly transmuting to art. With the dimming orange light of twilight moving across the sloped ceiling, I’d slide that day’s furled scribings under the locked castle door.

My work complete for the day, I would tune in to the radio and toast a roughly hewn slice of loaf at the slim marble fireplace. Beeswax candle extinguished, I would retire to a camp-bed in the corner, enrobed in a full-length satin nightgown.

I had a baby girl 10 months ago, and in the quiet of naptime I started writing murder mystery games.

A brief respite would come with each work finished. Comprehensive beauty treatments to be primped and polished; jewels to be borrowed from aristocratic acquaintances; a Bacchanalian feast or two to attend. Cinq à sept receptions at the trendiest of literary salons, crème de menthe laid on by an adoring patron. Beachside cocktail-making with playboy raconteurs, drinking only the local liqueurs.

But that’s not the world we live in. Given the often vicious competition, as writers we have to utilise and monetise any and all channels available, be it social media, blogging, vlogging, networking, book tours or readings.

I had a baby girl 10 months ago, and in the quiet of naptime I started writing murder mystery games. Now the print-at-home kits sell online to a wide array of party hosts from the UK, the US, Turkey, the Netherlands, Australia and Italy. What do they want? A cosy Miss Marple-esque game with an Irish twist.

To be honest, I stumbled into writing the games the way you might tipsily open the hot press at a house party. But I am glad I did, because as a writer, it’s usually not possible to scribe away remotely in a garret. The baby needs shampoo and we have to tax the Saab.

There tends to be a lot of drinking at murder mystery parties, the broken veins of overindulgence the modern murderer’s masque

I always want my murderers to get caught. And they usually have no recollection of the crime. No memory of a vicious fury or a jealous rage that led them to dropper mandrake in their husband’s tea or take a bread knife to their best friend’s vertebrae. Instead, the killer discovers their crime from a small card in a cute little envelope. Attempting to get away with murder, the murder mystery game begins, and the other guests try to deduce whodunnit.

Writing the scripts and instructions for murder mystery parties can be ridiculous and sublime. This is a world where time, gender and space become fluid, so cross-dressing is prevalent, as much for convenience as fun. If the killer is male, he’s often trussed up in a tuxedo, balancing his host’s aspirational Piedmont in a long-stemmed lead crystal glass. There tends to be a lot of drinking at murder mystery parties, the broken veins of overindulgence the modern murderer’s masque.

Perhaps the amateur detective has squeezed his toes into a pair of rarely worn cowboy boots or borrowed his son’s cape and wand. The sleuth could sport a Joycean pince-nez or balance an apple from a bowler hat over his face à la Magritte. Little Miss Muffet could be handing out goat’s cheese tartlets to a minotaur, an intergalactic diplomat and a Britney Spears-inspired songstress, all seated around a new patio table from Woodie’s.

Set in Erin’s fair countryside, my best-selling Murder at Stackallen Castle game counts a wild island woman; a troublesome and passionate Italian tramp-artist; a playboy younger brother, and some crusty Anglo-Irish gentry among its motley crew. The original immersive experience, murder mystery games are cliche-laden, but the familiarity of stereotypes allows bankers and schoolteachers, engineers and housewives to play the dinner-party game with a thespian-like flair.

A clandestine online love affair, a cryptocurrency deal gone sour, the unsuccessful and jealous older sister; the motives these fictional killers have to extinguish the life of another are as varied as humanity itself. Our sporting colleagues across the Atlantic often request ‘clean’ murder games, without drink, drugs, cursing or adultery. Deceit and murder, however, pass as acceptable for church lunches and charity fundraisers Stateside.

I wrote my second novel in a messy kitchen during my daughter’s midday naps. Amid blitz sessions at the laptop, my eyes flicked to the video monitor to ensure Shminkie the silky bear remained tucked under her warm little armpit. Progress on the novel would halt when the request for a bespoke murder mystery game arrived. I recently self-published my first novel, Dark Green, and was lucky enough to read from it at a LitCrawl event at the Hinterland Festival in Kells. I was very grateful for the opportunity, as am I grateful for every retweet or download on Amazon. But work is constant, never-ending, as each piece and project is prioritised and promoted – all with the ultimate aim of getting into the garret and back out again.

Returning to work in a busy PR agency, the murder mysteries and novel-writing are brushed into early mornings and weekends. Baby bathed and quiet in the Land of Nod, I once again assume the mantle of murderess. Late into the evening I tweet, vlog and liaise with customers. That in itself can be tiresome in its ludicrousness. Last night I was explaining the purpose of a letter-opener to an Italian singer planning his 50th birthday party.

But all these roles and channels aside, I am still writing novels. That piece of the dream has come true. And I still get to slurp chicken soup and listen to the radio.