The Consolation of Maps by Thomas Bourke: austere and elusive debut novel

Set in the mysterious world of cartographic trading, we are given limited access to the characters’ inner worlds 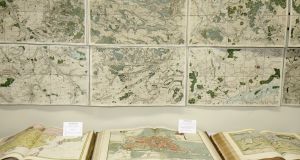 Kenji, the main character, believes that maps can assist in building a perfect world

Book Title:
The Consolation of Maps

Early in The Consolation of Maps, Thomas Bourke’s austere and elusive debut novel, the trio of central characters gathers in a late-1980s Manhattan gallery, which is being prepared for a glittering exhibition. Kenji is Japanese and has recently been headhunted from his curatorial position in Tokyo to work for Theodora Appel. She is a leader in the somewhat obscure world of cartographic trading, where rare maps can change hands for a fortune. She is also something of a mystery, by turns ruthless and empathetic; and reliant on Maria, her loyal Italian colleague and friend.

Standing in the unfinished gallery space off Madison Avenue, these three discuss the nature of time and space. Kenji has been giving the builders a hand, and is streaked with gypsum and sweat – unpleasant in such a fastidious individual. Just at this moment, however, his physical dishevelment is the least of his worries because his employer has been making remarks that Kenji does not quite like – and he is desperate to hold the line.

“Cartography is a progression,” Kenji says: he believes that maps – true and verifiable as they are – can assist in building a perfect world. But Appel can be harsh and dismissive, and at this moment, she is both. “Maps show the richness of their time,” she says. “This exhibition should illuminate their world.”

To Kenji, such an idea is grotesque – and this exchange lies at the heart of Bourke’s lithe, controlled narrative. When we first meet Kenji, we see an individual committed to the idea of forward movement, of advancement: the lights of Tokyo are illuminating the clouded skies above the city as though to create a star map by which he can steer. He is anticipating with apprehension the opening of his exhibition Progress in Cartography. Now, some months later, his new employer Appel seems intent on blasting to pieces the pillars of his philosophy of art, work and life.

The book is replete with maps and with references to them: the Mappa Mundi of Hereford, the Ortelius atlas, and a throng of others, each embraced by Kenji as worthy of love and respect. Conversely, the values which Appel embraces – the maps which sell for a fortune, the artefacts hunted down and traded for a million here and a million there, the commission to be earned, and the price to be paid for failure – clash horribly with the beauty and integrity of the maps. And as the story shifts from corporate Manhattan and suburban Washington, from liquidity, stocks and soulless business transactions, into new scenes under the frescoed ceilings of Florentine palazzi, and against the context of the lapping waves in the Venetian lagoon – this clash is magnified all the more.

But this, of course, is the point. Appel, for all her hard-headedness and her drive, is slowly revealed to be at odds with the world. We learn that she has suffered a trauma, and is intent now on manipulating time itself to try to recapture the sense of love and belonging that she was previously able to take for granted. Kenji, Maria, her company, her investors: each of the components of Appel’s world becomes collateral in her misguided quest – with potentially devastating consequences for all concerned.

Appel’s disastrous course, then, drives the action – but it is clear that this ascetic book is much more interested in the inner worlds of its characters. We are given only limited access to these interior lives: instead, the reader is expected to decipher a glance here and interpret a silence there, an exit here and an entrance there, with only limited assistance from sparse dialogue.

The influence of Beckett on the text seems unmistakable. Kenji’s background speaks silent volumes and although the book glances only briefly at the kabuki theatre in his Japanese home town, its debt to kabuki, from rapid scene changes to extreme stylisation to characters wearing heavy metaphorical make-up to shield them from the world, is manifest. Bourke has created a novel that, like the complex – at once historical yet aesthetic – objects from which it takes its name, repays effort and attention.