‘I want readers to be entertained, to shift from A to B without struggle’ 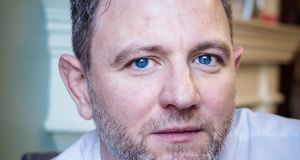 ‘Why did you write this book?’ is a perfectly natural question to ask any writer.

‘Erm…dunno, just did,’ is a wholly unhelpful and redundant reply, nevertheless.

Yet, sometimes ‘just did’ is the honest, and only, answer. I understand the dissatisfaction with ‘just did,’ I really do. And, if I continued with the ‘just did’ mantra I’d never be asked to attend any literary festivals, sit on author discussion panels or write articles for regional and national newspapers, would I? Readers and critics want genesis, they want to tap into the source material. I’ve always found it strange that journalists etc get to protect their source(s) while writers are actively encouraged to expose theirs.

My most recent book, The Weight of a Thousand Feathers, centres around 17-year-old Bobby Seed, who has to deal with the complexities of both being a teenager and being the main carer for his MS suffering mother. I, myself, don’t have a mother who suffers from MS nor have I ever been her main care giver. Bobby’s ailing parent asks him to assist in her death. To date, my own mother has never once asked me to kill her. Although, there have been numerous occasions when…oh, it doesn’t matter!

Point being, Bobby and his creator (me) don’t share any character and/or thematic traits whatsoever. So, when I came to write the book there was zero emotional memory to draw upon, no empathetic journey to be undertaken and no cathartic exorcism that required purging. I simply had a voice in my head, the bones of a story swirling around and a blank screen in my face, and off I set. Five drafts later, almost 70,000 words jettisoned and after hours of self-doubt I had, according to my editor, an acceptable version.

‘But, honestly, Brian, why did you write The Weight of a Thousand Feathers?’

‘I mean, there must be some reason why you wrote the bloody thing?’

Okay, the real answer is threefold:

I wrote it as a paean to my youth:

aside from the book’s obvious dark matter there’s many personal – and often light-hearted – assembly of set-pieces I’ve written about; there’s a littering of musical references plucked directly from my internal ’80s and ’90s juke-box and there’s the verbal jousting scenes that me and my Mum played out when I was a teenager. Reimagining these helped me start the process.

I wrote it as a love letter, if you will, to the mountain of young carers on these shores and beyond:

if I can allow myself any level of conceit it will be this one. In my previous incarnation as a secondary teacher I had the good fortune of being schooled in the gravity and intricacies of a young carer’s existence. Over the years these remarkable teens instructed me about the challenges they faced on a daily basis: the isolation they experienced; the constant exhaustion they lived under, the deep-rooted frustrations and fear they silently endured, not to mention a profound burden of responsibility they hoisted upon their shoulders every waking hour. It was sobering. The novelist in me knew that I’d like to truthfully and responsibly capture this world one day. In my mind, it’ll be the young carers who’ll judge The Weight of a Thousand Feathers’ success.

I wrote it as a piece of entertainment:

I know I shouldn’t be saying this, but as a writer I don’t particularly have anything illuminating or inspirational to tender. There’s no subject(s) I can shed light or elucidate upon. And, most definitely, I don’t possess the required narcissism to offer the paying customer a didactic document, experiential or otherwise. F*** that! I want readers of my books to be entertained, to shift from A to B without struggle; without feeling they’ve been battered by the egotistical ramblings of a vainglorious sentence builder. Read – enjoy – put away, that’s all. No need to cobble together a one- or five-star review.

I do understand that a novel about young carers, euthanasia and filial love is breaking no new ground. However, if you lob in a smattering of Carter the Unstoppable Sex Machine and Jesus and Mary Chain references you might, just might, be hitting on something that connects to a certain demographic aside the young adult readership. But, then again…

‘Why did you choose to read The Weight of a Thousand Feathers?’

‘And what did you think of it?’

And that’s okay too.
The Weight of a Thousand Feathers is published by Bloomsbury YA, at £12.99