An alien warrior, handling grief, and a boy who loves pairs are among this month’s highlights 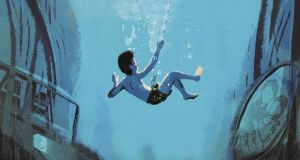 Cymbeline Igloo, the hero of Boy Underwater by Adam Baron is marked out by his classmates for being different.

There are no shortage of strange visitors to the world of children’s publishing this month, as families are confronted with creatures weirder than their wildest dreams. In Bumpfizzle the Best on Planet Earth by Patricia Forde (Little Island, £6.99, ages 8+), the eponymous alien warrior has taken the form of a 10-year-old earthling boy and insinuated himself the fabric of one family’s life, causing all sorts of trouble. Told in the form of letters to the Great Master Hornswoggle on his home planet of Plonk, Bumpfizzle narrates his daily struggles against the Mother, the Father, and, worst of all, the Baby, who seems determined to usurp any power or privilege that Bumpfizzle manages to earn. Bumpfizzle is, of course, no ordinary alien. Indeed, he is the alter-ego of Daniel, a real 10-year-old boy with lots of 10-year-old problems. The book is rich with contemporary reference and comedy, as Forde uses the alien perspective to offer the reader an alternative view of familiar family conflicts and academic challenges. Elina Braslina’s illustrations, meanwhile, bring life to Forde’s characters with an expressive clarity that effectively undermines the details of Bumpfizzle’s letters and points readers towards his dissembling. But that’s aliens for you: they just cannot be trusted.

Felix Twain, the 11-year-old hero of Sally Harris’s Double Felix (Wacky Bee £6.99, 10+), is also having some difficulties at school and at home. Felix loves numbers, specifically the number two, which has a nice, rounded feel to it. He thinks in pairs, counts in pairs, and is even known to cheat at games by skipping odd numbers, which his classmates just will not tolerate. Felix’s obsession with order is “holding him back from learning at school and... becoming dangerous to those around him”, as the Principal explains to his mother when she is called in for yet another conference about his disruptive, obsessive behaviour. To make things worse, Felix is about to gain a new brother or sister, which will bring an odd-numbered crisis into his very own home. It is the arrival of a strange new classmate, Charlie Pye – who appears on her first day dressed as a cat – that forces Felix to address his anxieties. Thrust together for being so different, the rule-maker and rule-breaker become fast friends and Felix slowly begins to realise that chaos can be a creative thing. Harris draws out Felix’s anxieties with great sensitivity, while the redemptive friendship will provide an effective model for readers who, like Felix, struggle to fit in.

Cymbeline Igloo, the hero of Boy Underwater by Adam Baron (Harper Collins, £6.99, 10+) is also marked out by his classmates for being different. There’s his name of course, which cannot be avoided, and the mysterious circumstances that surrounded his father’s death when he was just a baby. More pressingly, however, Cym cannot swim, and in St Saviour’s School athletic prowess is the most important thing. Cym may be the “third-best footballer in Year 4 (Joint)”, but when he has to be saved from drowning by a girl, he is set to be stripped of even this meagre standing. Baron explores some serious themes in this emotionally resonant book – grief, bullying, mental illness, family structures – but Boy Underwater never takes itself too seriously; the passages describing the school hierarchy and the dynamics of Cym’s extended family, in particular, are very funny. Cym is a quirky narrator too and his ability to deal with the difficulties thrown at him as the plot takes a very unexpected turn is exemplary. The final denouement may have shades of soap-opera about it, but it is inevitable pay off for the gripping, thickening mystery at the heart of this book.

If All the World Were by Joseph Coelho (Lincoln Children’s Books, £12.99, 3+) also has death as a theme. In this finely detailed picture-book, a young girl takes a walk with her grandfather. They amble through the seasons holding hands, playing with racing cars, writing and drawing together. However, as spring segues into summer, summer into autumn, the girl must accept her grandfather’s frailty, and finally, as winter settles in, his death. Coelho, best known for his poetry for young people, has crafted a subtle metaphorical story about the life cycle, offering memory as a comfort in the face of the death. Allison Colpoys’s illustrations create a vibrant vision of a life filled with love, as the girl’s sadness is swept away by her tender remembrance of her grandfather, who she decides to immortalise in a book.

In Rosa Draws by Jordan Wray (Words and Pictures, £11.99, 3+) potential inter-generational conflict is also resolved by a creative project. Rosa loves to draw more than anything, and the ideas zoom through her head like a circus train. A black cat “wearing a RIDONKULOUS hat”, a bear with “the most GLAM-U-LICIOUS long hair”....there is nothing too strange or challenging that she can’t conquer with her crayons. Indeed, Rosa gets so carried away with her freewheeling pencil forms that she forgets herself and draws all over the walls of her house. Luckily, her mother loves to draw too, and together they create the most exquisite mural for their house. Wray’s illustrations follow Rosa’s imaginative impulses, rendering familiar animal characters exotic with accessories and zany details: spot the monocled moose, the piratical giraffe and a super fast fox in running shoes. Jordan equally enjoys coining new words to describe the scale and ingenuity of Rosa’s creations, making Rosa Draws as much fun to read as it is to look at.