A crippling disease did not stop him making films or having children. He has died aged 43

Wicklow-born film-maker Simon Fitzmaurice has died of motor neurone disease at the age of 43. 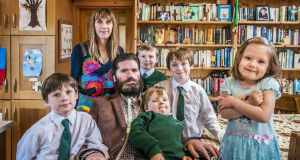 Ruth and Simon Fitzmaurice and their children Jack, Raife, Arden and twins Hunter and Sadie in their home in Greystones, Co Wicklow

“I’m, well, to be perfectly honest, a bit of a stubborn bastard,” Simon Fitzmaurice told The Irish Times in 2016. “I believe in the power of people’s ability to wake up to the fact that they are alive, simply because it occurs in my own life.”

The Wicklow-born film-maker, who has died of motor neurone disease at the age of 43, demonstrated that stubbornness by achieving the seemingly impossible. Six years after his diagnosis, now paralysed from the neck down, he finished My Name is Emily, his debut feature film, and unveiled it to an emotional ovation at the Galway Film Fleadh.

Scoring eight nominations at the Irish Film and Television Awards (Ifta), the film shared the most nods with Sing Street and Room during a famously golden year for Irish cinema. Frankie Fenton’s It’s Not Yet Dark, a documentary detailing his struggles, is currently in cinemas.

Fitzmaurice was raised as part of a middle-class family in Greystones. “I was in a class where everyone was better than me at everything. Genuinely. Maths, Irish, French, everything,” he said. “Except English. English was different. We had the best teacher an aspiring writer could wish for.”

He and his father shared a passion for film and used to happily immerse themselves in classics such as The Godfather. He attended film school. He lived the student life. He met an aspiring radio professional named Ruth O’Neill and they fell in love.

In It’s Not Yet Dark, Ruth, who married Simon in 2004, remembers not much liking the loudmouthed film-maker when they first met. She went on to become a vital collaborator as well as his primary emotional support.

His first short film, Full Circle, detailed the near-telepathic relationship between a chip shop employee and the security guard who works across the street.

His second short, The Sound of People, turned out to be eerily prescient. The Northern Irish actor Martin McCann plays a young man contemplating his past and future when confronted with mortality.

The Sound of People, a dreamy, thoughtful film that betrayed the influence of Terrence Malick, did everything that a short can do. It was chosen for the Sundance Film Festival – a notable honour – and, in early 2008, he travelled to that Utah event in a spirit of optimism.

It was at this point that the illness began to insinuate itself. The first sign was an awkwardness in his foot that distracted him as he walked the snowy streets at Sundance.

He remembers a shoe shop employee being baffled by the strange floppiness. “No, I’ve never seen anything like that before,” the salesman said.

Years later, Fitzmaurice recalled: “The look in his eyes becomes a twinge in my stomach . . . My first diagnosis is by a shoe salesman.”

The final official diagnosis later that year came as a total shock. Ruth and he went to their favourite restaurant and failed to process the unmanageable. She had just learned she was pregnant with their third child.

The doctors gave Fitzmaurice just four years to live. A slow, institutional decline seemed inevitable, but he was determined to go home and, with the help of a ventilator, live among his young family.

“To them it is inconceivable that I would want to live,” he wrote of the sceptics. “For me, it’s not about how long you live but about how you live.”

The couple beat the odds and had two more children, twins Sadie and Hunter.

Fitzmaurice determinedly set to participating in the raising of his children and continuing his creative explorations. The family travelled to Australia. They altered their philosophies. With the help of an eye-gaze computer – equipped with a sensor that follows the user’s glance – Simon first wrote It’s Not Yet Dark as a memoir. The book went on to become a bestseller.

My Name is Emily was an altogether more ambitious project. Starring Evanna Lynch, the Harry Potter alumna, as a young girl travelling across Ireland to free her father from a mental institution, the picture confirmed the director’s gift for blending playful visuals with a keen philosophical inquisitiveness.

Money was raised through conventional sources and through crowd-funding events. Production began in 2014.

Assisted by “support director” Liz Gill, Fitzmaurice planned the shoot meticulously. New techniques had to developed at every turn.

“It was a different set because, even under tremendous pressure, everyone displayed the utmost patience while I typed my thoughts on screen. It was insane, but as a team we made it work,” he said.

The picture won best cinematography and the Bingham Ray New Talent Award at the Galway Film Fleadh. It opened in the United States earlier this year, to strong notices.

As his illness progressed, Ruth and Simon found themselves becoming public figures.

It’s Not Yet Dark functioned as both a gripping story and an inspirational text. The film version, which premiered at Fitzmaurice’s beloved Sundance in February, has also engaged powerfully with audiences. “The best part of living with MND is the living part,” he says in the film.

Meanwhile, Ruth developed her own parallel career as a writer. An article in this newspaper on her passion for swimming in Greystones led to a lucrative book deal. Ruth’s I Found My Tribe was published this summer.

Simon’s conspicuous determination to live became as important as his work. An inspiration to everyone who entered his orbit, he developed into something of a legend in the years following that diagnosis.

“If I didn’t have Ruth and my five children I don’t think I would have made it this far,” he said in 2014. “I would have made it a certain distance because I’m an inherently stubborn bastard. But Ruth and my children are my fuel, I run on my love for them. It doesn’t matter who or what you love, it only matters that something outside of your life fuels your desire to live.”

He is survived by Ruth Fitzmaurice and their five children.