Heloise and Abelard: the more the story is retold, the deeper their grave in Paris grows

‘The story still possesses great magnetic force, and it wouldn’t let go of me until I had written Tongues’ 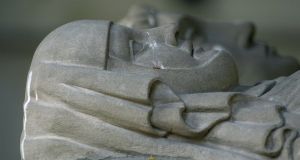 A detail of the tomb of famous French lovers Heloise and Abelard in Père Lachaise Cemetery in Paris. Photograph: Joel Saget/AFP/Getty Images

There is no doubt that the High Gothic tomb in Père Lachaise cemetery in Paris, where Abelard and Heloise are presumed to repose, would not be the destination for lovers, which it has been for centuries, were it not for the undying myth that also lies there.

Both are rebels and this, the legend goes, is the basis of their passionate and tragic attraction. What makes the story especially compelling is not just the celebrated defiance of each but the price he and she both pay for that extravagance. It’s the way their story deviates from the standard romance that continues to mesmerise.

Abelard pays for crossing the line from teacher to lover by being castrated in the name of Heloise’s family, when she becomes pregnant without a public marriage to legitimise her condition. And Heloise emerges as a singularly independent but solitary figure, who lives a life as a nun dedicated to the spiritual work of Abelard, the monk, but always painfully estranged from him, though secretly married.

The story still possesses great magnetic force, and it wouldn’t let go of me until I had written the long poem, Tongues.

What gripped me as I read and re-read their epistolary exchange, which occurred more than two decades after their explosive affair, was precisely the effect that the passage of time and the intervention of physical and emotional distance had on their shared past. These are not letters composed in the heat of passion, the glow of infatuation or even the venom of rejection, but rather contemplative letters looking back on a drama that changed both their lives forever.

There has been time for reflection and personal integration – or its lack: for further self-destruction and rigid self-defence (the sad fate of Abelard it seems). For the student of the lifelong relationship between these two complicated individuals, the mature letters present us with much more defined and seasoned personalities. Essentially more themselves, they appear in some respects closer to each other and in others never more distant.

A major attraction to their story for the creative writer is the amount of scholarly debate and contention that still burrows into the legend, leaving more and more openings for poetry or fiction. The provenance of certain passages is still questioned, particularly those of Abelard. And with regard to those words deemed by most as authentic there are trenchant issues concerning the accuracy of translation from the Latin. We are reminded by such critics that translation is also interpretation and has everything to do with assumptions about character and plot.

We only have to look at Scott Moncrieff’s translation of their letters, my source for Tongues, to get a glimpse of how contested such a text can be. George Moore, the Irish fiction writer, who late in life wrote his own adaptation of the story, contributes aptly an epistolary foreword to the Moncrieff folio. The publishers and the already esteemed translator must have considered this a coup: George Moore’s imprimatur. Moore’s response, however, serves only to undermine Moncrieff’s effort. At one point, Moore, apparently exasperated, sums up his differences with Moncrieff via this blunt assertion:“I would contest your reading of the letters at every point”.

The nub of their differences largely comes down to their respective takes on the sex shared between the two spirited creatures. Moore accuses Moncrieff of ascribing nothing more than lust to Abelard. And Moore, who takes vigorous issue with this over-simplification, argues that true passion runs the gamut from lust to love, from the rush of hormones to the transport of the spirit.

Moore furthermore regards Moncrieff as deaf to the significance of Abelard’s insistence on the role of reason in faith, for example being adamant about the existence of three distinct and separate entities in the so-called “Holy Trinity”. Moore, with resounding approval, deems Abelard “the first Protestant”.

In a flash, as you read Moore, you see that he is portraying his very own Heloise and Abelard. The author known for sexual frankness in Esther Waters is determined to see this bold possession of the body in Heloise. The letters, however, can equally reveal the loss of Abelard, which she suffered by insisting that physical distance would yield greater physical intimacy.

And with regard to Abelard, Moore – the eventual convert to Protestantism and author of The Untilled Field with its rampant anti-clericalism – is bound to see the disruptive monk as a nascent Luther.

It would appear that everyone writes their own version of the myth, and I am no exception. We now live in an age when popular culture fixates on celebrities, deifying them one moment, demonising them the next. Abelard was just such a medieval celebrity and suffered that exact, whiplash distortion. It required Heloise to restore the actual Abelard to us.

What I hope Tongues finally articulates is just how long it can take a person to begin to see themselves accurately, let alone another, let alone the other with whom they were myopically close. For all this effort at truth, Tongues is no doubt merely my Heloise and Abelard (definitely in that order). The more retellings of the story we have the deeper that grave in Paris grows. May they rest in peace.
Tongues will be published in Poetry Ireland on Thursday, April 11th, at 6.30pm