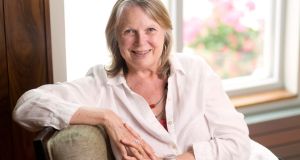 On Thursday evening, April 11th, fellow poets and friends, Katie Donovan and Jane Clarke, will join me in helping to launch Peggy O’Brien’s new poetry collection Tongues in Poetry Ireland, Parnell Square. Peggy was our teacher in Trinity when we studied English there in the 1980s and so this will mark continuing circles of friendship and support started all those years ago.

Peggy O’Brien came to Ireland as a young postgraduate student to UCD and met and married the Irish poet Brendan Kennelly 18 months later. By the time we came to Trinity they were both teaching in the English department, had a daughter together and the marriage was coming to an end.

The department we arrived into in 1980 seems to me now a kind of idyll. Theory had not yet arrived. I came on a full maintenance grant from the North and had an education department that also paid my fees. Our teachers loved their subjects and there was time and room to think and to play. I am sorry now when I hear parents ask why a university course can’t be taught in a year because of the constraints of cost, as if it were only about acquiring knowledge as quickly and efficiently as possible. We were students, not clients and our teachers were just that. They taught. In all my four years in Trinity I can remember the one time I was taught by a PhD student – remembered because it was so rare and because it interrupted the richness and brilliance otherwise of the classes.

David Norris would roll his bike onto the lecture theatre floor and prop it behind the podium when he’d give us the gift of Ulysses – which I’d tried to read before college and failed. In the lively demotic of Dublin, it came alive there and then. Nick Grene taught us drama – he once wrote on an essay of mine that he noticed I’d a penchant for the word penchant!

And Kennelly – Kennelly was brilliant. At first when we found out he was married to our beautiful American lecturer, the match seemed incongruous – she tall and willowy, blonde, sophisticated; Brendan small and indelibly Irish, but then he spoke and lectured us and we were transfixed.

He could be cutting. He, wrongly, sometimes accused us all of being middle-class and having it easy – telling us we should be iconoclasts, radicals, pissing in supermarkets. Once I told him of hearing Heaney read with Derek Mahon in Derry in 1979, on a tour of the North, called In Their Element. I explained excitedly that in the idea of the tour Heaney represented the earth and water while Mahon was the air and fire, to which he gave his characteristic reply, “My arse!”

But he also encouraged in us a great love of poetry, quoting Keats always on the importance of “the holiness of the heart’s affections”.

Peggy I remember not in the lecture theatre – though she must have been there too – but instead in the more intimate surroundings of her office for small tutorials of maybe five or six of us. I can still conjure vividly the smell of the Arts Block – the polished concrete that should have been brutal but which was instead warm and quietened by rubber on the doors and carpet on the floors.

I can remember too the atmosphere of those tutorials – not so much the kind of aggressive to and fro of Oxbridge as a relaxed, easy atmosphere, though no less rigorous, which, when entered, seem to transport us through Peggy’s warm New England voice, off to the world of Bradstreet, Hawthorne, Emerson,Thoreau and her beloved Dickinson. We all have teachers who are important to us and Peggy was definitely one of mine. I think many of us were a little in love with her, certainly in awe.

I came to Trinity already with a love of American literature so I took many of her classes in the four years I was there. I lacked confidence, so although I’d written and read ferociously all through my teens, I stopped writing my own poetry in college, and stopped the debating I’d been good at too, somewhat overwhelmed by the confidence and brilliance of many of my fellow students.

Many of us went on to be writers or to have a role in the arts or the media: Alan Gilsenan, Victoria White, Declan Hughes, Hugh Linehan, Patricia Murphy, John Kilraine; and of course Jane and Katie. Of all of us Katie Donovan had, I think, the strongest sense of herself as a writer even then. She was active in the Literary Society and I still have the little pamphlet of poems she produced, in 1981, called Wordshop and featuring ourselves plus some of those who, to quote Katie’s editorial, “had already Made It [sic]“ – Harry Clifden, Philip Casey and James Liddy. Katie would publish her first book, Watermelon Man, with Bloodaxe in 1993 – less than10 years after our graduation and having completed a Masters in Berkeley, California.

I left Trinity in 1984 and Peggy was my chief referee. She was the academic I’d worked most closely with across the four years. I still have the reference she wrote for me – this was pre-computers so you had to have a hard copy. It was expansive and amazingly perceptive, since I can now see she was pointing out that my bent was really creative rather than academic but she helped me win a place to study for a Masters in the University of Massachusetts at Amherst, where she herself would go to after Trinity for the second half of her academic career. If I’d taken up that place, perhaps we’d have gone on to be colleagues, but I chose research at UEA in Norwich instead and it took years to come back to writing.

In some ways we passed each other metaphorically in the skies. I flew back to Ireland in 1984, leaving my Trinity lover in Boston in the summer after college, knowing that if I went to Amherst he and I might limp on and that that was a bad idea – though I wept the whole way across the Atlantic leaving him. And Peggy flying in the other direction in 1986, casting off her widow’s weeds as she put it and starting a new life for herself in Amherst, where she would happily find both love and her own poetic voice.

I can still remember the excitement I felt on hearing that she had begun to write poetry and the joy in reading her first book, Sudden Thaw, published by Lilliput in 2004, to be followed by Frog Spotting in 2009 from Dedalus and Trusting Ice in 2015 with American press Orchises.

I came back to writing when I turned 40 and published my first collection, The Work of a Winter, in 2018 with Arlen House Press. Jane published her first book The River with Bloodaxe in the summer of 2015 to great acclaim and her second book, When the Tree Falls, is due from Bloodaxe later this year. Her pamphlet on the soldiers of the first World War, All the Way Home, has just been published by Smith/Doorstop. Our friendships from college endured and the support of these women in my writing has been invaluable. We have all supported each other along the way.

I also became a teacher and when my A-level students settle in for a lovely couple of hours discussing literature, sometimes indeed Hawthorne or Dickinson, I like to think that I learned something of how to teach all those years ago in Peggy’s arts block office.

On Thursday Katie, Jane and I will read poems from Tongues with Peggy at Poetry Ireland, Parnell Square starting at 6.30pm with guest speaker Antony Glavin.