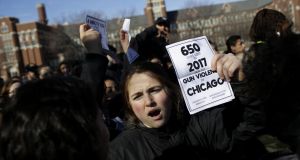 Book Title:
An American Summer: Love and Death in Chicago

To arrive at the number of gun deaths in Chicago between 1990 and 2010 add the death toll from the Troubles to total US losses in Iraq and Afghanistan. Now increase the sum by more than a third again. The figure this spits out is 14,033, plus another 60,000 wounded. This was during peace-time in the wealthiest nation on earth.

The grisly catechism, “A single death is a tragedy; a million deaths is a statistic,” has been attributed to Stalin. Whatever the provenance, it conveys our tendency to glaze over at large numbers, especially when the casualties are remote from power centres. Most of these deaths, and they have scarcely abated since 2010, occurred far from downtown Chicago’s opulent lakefront high-rises and Art-Deco skyscrapers. They occurred in the city’s impoverished, largely African-American and Hispanic, southern and western reaches. Taking a dig at the dog-bites-man shrug of the wider populace towards death in these precincts, the Chicago Sun-Times captioned a report of a homicide on upscale Michigan Avenue thus: “Murder at a Good Address.”

This and other details are grist for Alex Kotlowitz’s An American Summer, an account of the human toll of the drip-drip of daily violence in the United States’ third-largest city. The subtitle is “Love and Death in Chicago,” and this is far from a glum book about abject lives. Survivors form mutual support groups – “they live richly in mourning” – and those who have inflicted violence turn their lives around. But their stories resist narratives of closure and redemption.

There’s scant consolation for Lisa Daniels at the trial of her son’s murderer. “They had pulled guns on each other. Victim. Perpetrator. The lines blurred. There was no nobility in her son’s death . . .” She feels like a pariah around other grieving mothers. In a remarkable act of forgiveness, she beseeches the judge to show clemency. “There’s a lot to admire in what Lisa did,” Kotlowitz writes, but “forgiveness is easier . . . where the victim . . . just as easily could’ve been on the other side of the equation.”

Myrna Roman is a rock in her community but can’t forgive the teen who arbitrarily killed her son then gloated in court. Meanwhile, stabbed and shot, Marcelo looks to have left the streets behind as a bright prep school scholarship student. But he feels their inertial undertow and commits a violent robbery spree that puts him on the hook for a felony conviction. The judge shows mercy but, medicated to quell debilitating anxiety, Marcelo spends two years manacled to a monitoring device.

Kotlowitz reports on teens consigned to wheelchairs or fitted with a colostomy bag because of their injuries. Others are unbroken in body but brooding and on a hair-trigger. Thomas is “the Zelig of . . . violence” in troubled Englewood. As a child, bullets raked a birthday party he attended killing the 11-year-old host. Then there’s “the time he saw a boy shot in the face in a nearby park. And his friend who was shot in the leg. And his brother [paralysed by a bullet]. And coming upon two men who’d been shot and killed still sitting in their car . . .” This was before his girlfriend was killed next to him and a litany of other gruesome incidents.

Much of the violence stems from “beefs” of forgotten origin, perceived slights, or “just because.” Nothing so coherent as “turf” wars. Around the turn of the millennium Chicago police sought to decapitate gang violence by rounding up the kingpins, Kotlowitz relates, but, absent action on the economic despair that spawned it, a hydra-headed beast sprouted in “the vacuum” – “scores of cliques or crews, organised . . . block to block,” membership of which is almost by default. And if you value your own life, don’t even think about reporting a suspect; “snitchin’” can carry a death sentence. Perhaps the most staggering statistics of all: just one out of four killers are collared; where the victim’s merely wounded the odds lengthen to one in 10. Ramaine Hill, who helped bring a shooter to justice, is assassinated in a park on a Saturday afternoon. No one saw it.

At bottom, American Summer is about American exceptionalism, but not the kind spoken of by that son of Chicago’s privileged northern suburbs, Donald Rumsfeld. Instead, it’s a story of near-hermetic racial segregation and permissive gun laws. The latter erupts into public consciousness with mass shootings, but Englewood and its like, burying scores of their youth each year, bear the daily price, Kotlowitz notes. Strewing these pages: acts of impulsiveness and bravado by young men “for whom a sense of future feels as distant and arbitrary as a meteor shower,” rendered lethal by the admixture of easily-acquired firearms.

Kotlowitz, a New Yorker contributor, co-produced an excellent documentary on Chicago’s violence – “The Interrupters.” He’s too shrewd and has seen too much to tender any prescriptions.

It’s “a conflagration,” he writes, “a firestorm of forces which have led young people to make choices constricted and directed by the burden of circumstance.”

Monty Python hits Netflix. Here’s what to watch and avoid