Five of the best art shows to see this week 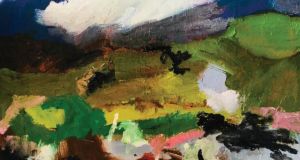 As folklore has it, the half-light of dawn and dusk are the hours “when mysterious or magical events can occur.” In this year’s annual Macroom project, curated by Debbie Godsell, she, Fiona Kelly and Sarah O’Flaherty take different, complementary routes into the ambiguous in-between realm, as the everyday becomes other-worldly.

New Zealander Kelvin Mann, animator and printmaker, addresses the story of New Zealand’s black robin, driven to the point of extinction – with just an estimated five surviving at one point – and saved at the brink by the efforts of conservationist Don Merton’s team. It’s thought about 250 are currently living, all descended from a sole surviving female, Old Blue.

Part of the extensive Brian O’Doherty/Patrick Ireland Project and curated by Eamonn Maxwell, beyond walls focuses on O’Doherty longterm friend and collaborator Dan Graham and is his first solo show in Ireland. It includes two early film works by him plus the landmark double edition of Aspen magazine, Aspen5+6, edited by O’Doherty (with a special event of its audio elements on September 1st, Listening to Aspen).

Maureen O’Neill: Outlook and Maureen O’Connor: Time Out of Mind

Maureen O’Neill’s paintings are instinctive, spirited reimagingings of her encounters with the familiar landscapes around her – mountains, coastline, sea. While Maureen O’Connor takes her cue from elements of the everday, her paintings emerge from the chance collisions of different things and different orders of object and event.

Co-curated by Askeaton Contemporary Arts and LCA, The Expanded Field stems from a series of artist ressidencies devoted to exploring facets of the Irish countryside, with Askeaton and Lismore as bases. The Domestic Godless have produced a Spirit of Munster alcoholic drinks Collection; the Centre for Land Use Interpretation compares sites of mineral extraction; Olivia Plender delved into social structures that bind local communities; plus work by Superfolk, Filip Van Dingenen and Stuart Whipps.

The 100 disappearances by the IRA during the Irish revolution
7