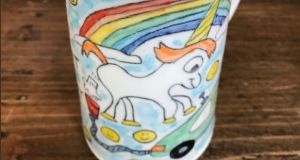 A Colorado artist says he has reached a settlement with Elon Musk after challenging the Tesla tycoon’s use of a farting unicorn motif that he had drawn as an ironic tribute to electric cars.

Musk used the cartoon image on Twitter, without attribution, to promote his Tesla electric car range, and ignored the artist’s attempts to come to a licensing arrangement, telling the artist’s daughter it would be “kinda lame” to sue.

The billionaire’s brusque response to the artist’s claims generated a raft of headlines, presaging his latest social media controversy in which he called a British man involved in the rescue of children trapped in a Thai cave a “pedo”.

But on Friday night, the artist, Tom Edwards, said in a blog post he had reached an agreement with Tesla “that everyone feels good about”, without going into specifics.

“It’s clear there were some misunderstandings that led to this escalating, but I’m just glad that everything has been cleared up,” he wrote. “I’ve always been a Tesla fan, and I’m looking forward to getting back to making pots and selling them in my online store.”

Edwards (61), a potter, first unveiled his design – a depiction of a unicorn farting electricity into an electric car – on a mug in 2010. “Electric cars are good for the environment because electricity comes from magic,” it said, in a wry comment on the use of fossil fuels for the vehicles.

Sales of the mug spiked in February 2017 when Musk tweeted a photo of one, describing it as “maybe my favourite mug ever”. But the following month he tweeted an even more crudely drawn copy of the image to promote Tesla’s new “sketch pad” feature. It subsequently appeared as an icon on Tesla vehicles’ operating systems, and in a Christmas message to Musk’s customers.

In May, Edwards’s lawyer sent a polite letter to Tesla seeking a “discussion” and a “mutual decision” over the company’s continued use of the farting unicorn motif, but received no reply.

After Edwards’s daughter raised the issue on Twitter, Musk replied: “He can sue for money if he wants, but that’s kinda lame. If anything, this attention increased his mug sales.”

Musk, who has since deleted all his tweets related to the farting unicorn dispute, is gaining a reputation for impulsive behaviour on social media. This week he was forced to apologise to Vernon Unsworth, a Briton who helped rescue a group of boys and their soccer coach from a flooded cave in Thailand, after calling him a “pedo” on Twitter.

He deleted the offending tweet, which was made after Unsworth questioned the usefulness of a mini-submarine Musk was offering to help the rescue. He also deleted a subsequent comment in which he said: “Bet ya a signed dollar it’s true.” – Guardian