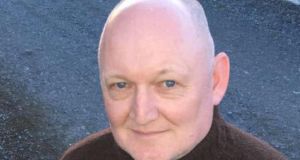 Stephen Loughman: “You look at a facade and you have no idea what’s going on inside, the lives people are leading, what they are thinking.”

When he was making work in preparation for his participation in the São Paolo Biennial in 2004, Stephen Loughman says that he had a breakthrough moment. Loughman is a representational painter, but his work eschews what we normally think of as artistic style. It’s as if he aims for a style-less, deadpan mode of painting. No expressionist flourishes, no virtuoso moments, just the facts. Yet there is usually an atmospheric unease to his paintings, something that certainly holds true for the work in his new exhibition at Temple Bar Gallery, Proven Answers.

Those São Paolo paintings included a view of a gorilla in a display case in the Museum of Natural History, sunlit parkland seen through wire-mesh fencing and an imagined view of a starry sky, all of which put the ostensible subjects at one remove in various ways.

But the breakthrough he refers to happened in two other works. One, Remember?, is a monochromatic view of an interior that evokes a shot from a black-and-white film and the other, Moriarty, is taken directly from a frame in They Might Be Giants, the 1971 movie with George C Scott as a man who believes himself to be Sherlock Holmes.

It was, Loughman recalls, the first time he had worked from a film still in that way, and it was oddly liberating. A film comes with vast background baggage, both real and fictional, encompassing everything from its narrative to its production history and, for that matter, its existence in the memories of the people who have seen it.

“For me,” Loughman says, “it meant I could piggy-back on the meanings tied up in the image,” while at the same time he wasn’t actually tied to the meaning as represented by the cinematic image. His painting could imply other things, play against the received meaning, establish new contexts, and lots more.    “As a way of working, it really came to fruition in a two-person show I did with Mark O’Kelly in the Galway Arts Centre in 2008. The sources for the paintings in that show were some of the films I liked when I was young.”

As Hugo Hamilton wrote of the work at the time: “We exist primarily in the imagination . . . it is essentially along the axis of imagination that we come to life.” We inhabit many other narratives, he suggests, even as we live our own. Loughman has never sought to summarise or otherwise encapsulate the films that engage him. Actors don’t feature. Rather he will light on a view or a setting that we might have registered subliminally but probably do not consciously recall.

He remembers a conversation with one visitor to that exhibition about his painting Chrissie. Looking at the nighttime view of fenced dunes, the man – American – experienced a jolt of recognition and said he was sure he knew that place, to the extent that he felt he had been there. “I didn’t know quite how to say to him that he probably did know it, but not in the way that he assumed.” The painting was based on a frame from early on in Jaws, a quiet but ominous moment.

While he avoids style, it is true that the distinctive look of Loughman’s paintings predates his appropriation of film frames (strictly speaking, his sources are literally frames, rather than film stills, which are usually more calculated, polished items). The look entails a studied neutrality. He sounds genuinely a bit perplexed about it himself. A term such as photorealist, which has on occasion been applied, is wide of the mark.

“I don’t even think I’m particularly meticulous,” he says, “I’m not academically correct, and definitely not photographic.” As he notes, there can be a touch of something close to naivety in the flat, uninflected directness of his delivery.

Also, while his working process is immersed in imaging technology, he doesn’t separate the technology out from the painting. It seems to be a continuum for him.

“Applying paint is just as valid, for me, as taking photographs. I mean, I don’t read that many art magazines, but recently I read a piece in one about how representational painting is coming back, again.” He rolls his eyes. “Once you address the world around you, I think whatever means you use will be pertinent.”

He has not confined himself to filmic sources. Two years back, his solo exhibition at Kevin Kavanagh Gallery, WI, drew on a series of photographic postcards issued by the Women’s Institute and thematically centred on “England’s green and pleasant land”.

Loughman applied his method of taking on a body of imagery freighted with its own meanings and agenda and subtly disrupting it, so that emblems of reassurance and continuity in his paintings suggest instead uncertainty and disquiet – while the work was made chiefly prior to the Brexit referendum, the exhibition was seen in its aftermath.

Once you address the world around you, I think whatever means you use will be pertinent

He is firmly back on cinematic ground in Proven Answers. The sources for all of the paintings are science fiction and horror films, a couple being key: The Illustrated Man and Fahrenheit 451, both based on books by Ray Bradbury. Loughman says he doesn’t really distinguish between the two genres in the sense that: “While, for example, science fiction might purport to be about the future, and horror about the occult or whatever, they are in fact usually about current issues and anxieties.”

The largest single painting pictures the exterior of a modernist suburban house. It is the house of the book-burning protagonist Montag in Fahrenheit 451, a dystopian parable in which literature has been outlawed and the population is pacified by medication and manipulative television programmes. Technology may have moved on but its relevance is undiminished. The title, Golden number 8 refers to a sedative.

“You look at a facade,” Loughman comments, “and you have no idea what’s going on inside, the lives people are leading, what they are thinking.” On one level, that’s not a bad description of one of his paintings.

The two complementary images making up the diptych Wolf/Walking, both of chairs wedged against doors, are sourced from modern horror movies Babadook and It Follows, and it doesn’t take that much imagination to see them as indicative of heightened fears of outsiders.

Other films used include Her, Spike Jonze’s speculative drama charting the relationship between a human protagonist and an intelligent operating system; Capricorn One, which hinges on a faked landing on Mars; The Road, adapted from Cormac McCarthy’s dystopian fantasy, and the 1960s spy thriller Billion Dollar Brain, from Len Deighton’s novel.

In each case Loughman is adept at presenting us viewers with a facade that invites us to look beyond, to explore the house, or the world, behind the image. In one of two episodes he draws on from The Illustrated Man, children who become obsessed with virtual reality unleash beasts that kill their parents. In the other, people search desperately for a fabled refuge on a hostile planet. This latter he opted not to treat in terms of paint but as a miniature three-dimensional tableau, which we can view through a kind of spyhole.

Loughman’s deceptively simple paintings are in fact marvels of economy, and their relevance and implications have continued to grow enormously since that breakthrough moment back in 2004.