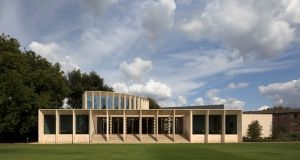 London-based Irish architect Niall McLaughlin has been nominated for the prestigious RIBA Stirling Prize, which is awarded for the best new building in the UK. Mr McLaughlin is nominated for his work on the Sultan Nazrin Shah Centre for Worcester College, Oxford.

The architect will face stiff competition: Bloomberg’s €1.1 billion HQ in the City of London designed by Norman Forster and an extension to the Tate St Ives Gallery designed by Jamie Fobert are on the shortlist of six buildings for the 2018 prize.

“We were very lucky with all the people around us and the opportunity we were given with this site. When you get those chances, you really have to take them. It was a case that the circumstances couldn’t really have been better for an architect,” he siad.

The Sultan Nazrin Shah Centre, which resembles a limestone temple, is an elegant complex of an auditorium, a dance studio and teaching spaces set in protected parkland. From the plunging pleated roof of its fan-shaped auditorium, to the sprung-floored studio that looks out on to a lake, attention has been lavished on every detail – a level of care that was possible given the generous €10 million budget.

McLoughlin will be hoping that this will be a case of third time lucky: he was shortlisted in 2013 for his Bishop Edward King Chapel, at a theological college near Oxford and in 2015 for a social housing project he designed in Whitechapel in London.

Mclaughlin said his past projects were very different opportunities. “A chapel and a lecture theatre for an Oxford college are at one end of the spectrum, and low-cost housing is at the other end, but they are equally interesting.”

On his creative process, he explains that he and his team are drawn towards natural materials such as stone and wood. “I think what we are trying to say is that bold new modern buildings can take their place in older stark settings, sometime they will be the building that people value in the future I hope”.

Although based in London, he has branched out to work further afield. “We’re working on a project in Tokyo at the moment. We are making a ceramic bamboo forest for a fashion brand,” he says. He is also undertaking theInternational Rugby Centre in Limerick, which he says has been “a really enjoyable project to do”.

McLaughlin’s favourite Dublin structures include Berkeley library in Trinity College, The Bank of Ireland on Baggot Street and The Department of Finance on Stephens Green by Grafton Architects.

He is enthusiastic about the architectural talent emerging from Ireland. “There are so many amazing practices working out of Ireland, and when I go anywhere in the world people say what’s in the water over there in Ireland! I don’t think people here in Ireland realise what resources exist in the country already and I think architecture is having a really great moment in Ireland.”

When asked where he finds inspiration McLaughlin references the Whitechapel project again. “I have to say the thing about that project is often when I’m feeling a bit down in London I’ll just get on the bike and go down and sit in the little courtyard and watch London dads hanging off the balcony and kids playing football in the courtyard...The people who live in that aren’t worried about whether it won a prize or not or whether it’s a piece of architecture or not it’s just hopefully getting basic things right. I find that probably more enjoyable than anything else I’ve done.”

His connection to the project is not surprising, as McLaughlin is firmly in favour of affordable housing. “I’m a great fan of what people used to call council housing and what we now call affordable housing,” he says.

“I think it’s the responsibility of governments not to just farm it out to private developers or try and think there is some other way of doing it. I think it is necessary for safe, well built, durable housing that supports communities to be built in places that are close to where people work and I think that is a significant national, social responsibility.

“I’m always looking at how architecture has developed and why people have needed architecture over time and what role it plays. I’m much more interested not in what things look like but in what role they play. That’s a much more important aspect of it than making pretty pieces to look at.”

McLaughlin graduated from University College Dublin in 1984. He worked for Scott Tallon Walker in Dublin and London between 1984 and 1989 and established his own practice in London in 1990.

The winner will be announced in in October. Hastings Pier, in Sussex, won last year’s award, after it was devastated by fire in 2010.

A floating auditorium crafted from classic Oxford stone and natural oak to blend exquisitely into the established landscape of Worcester College.

Bloomberg, London / Foster + Partners: A highly-innovative new workplace in the City of London, commissioned by an ambitious civic-minded client, which pushes architecture’s boundaries and seeks to enhance the neighbouring public realm.

Bushey Cemetery, Hertfordshire / Waugh Thistleton Architects: An extraordinary spiritual building formed of natural rammed earth walls, oak and rusted steel, with the beliefs and customs of the Jewish faith at its heart.

Storey’s Field Centre and Eddington Nursery, Cambridge / MUMA: A breath-taking building, commissioned by the University, for the new community of North-West Cambridge. Inspired by the college cloisters and courts of the City, this project has a sustainability agenda at its core.

Tim Winton: The Shepherd’s Hut review – a man on the run in the outback
7

Is it okay to have children in a time of climate chaos?
9

Fintan O’Toole: Bono at 60 – Why is Ireland so ambivalent about its most famous son?
10