History meets fantasy in 17th-century scrolls at the Chester Beatty Library, in Dublin 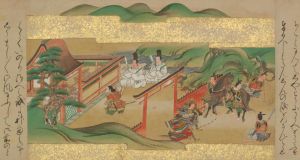 The Valiant Adventures of Tawara Toda: part of the scrolls on view at the Chester Beatty Library until January 2019

What is it?
The image is a section of The Tale of Tawara Toda, which takes the form of three illustrated scrolls, made in 17th-century Japan.

How was it done?
Dating from the early Edo period, the three scrolls are finely detailed, and beautifully drawn and painted, in terms of both images and calligraphy. The illustrated folk tale is of the type known as Nara ehon, or story painting. The artists are unknown, but their consummate skill is obvious. They used inks and pigments on paper. There are two narrative threads, one historically based, dealing with the role of the Hiean-period warrior Tawara Toda Hidesato in the events of his time, and the other concerning the fantastic medieval folk tale of which he became the hero.

Where can I see it?
The Valiant Adventures of Tawara Toda, at the Chester Beatty Library, in Dublin Castle, has the three scrolls on view until January 13th, 2019. It marks their return to the library after a three-year conservation programme at the Restorient studio, in the Netherlands, a project underwritten by Japan’s Sumitomo Foundation.

Is it a typical work by the artists?
Like all of the Chester Beatty collection, the scrolls are very fine works of their type. The real Fujiwara no Hidesato lived in the 10th century. When a powerful landowner, Taira no Masakado, led an insurrection against the central government and declared himself the new emperor, his own uncle numbered among the casualties he inflicted. A price was immediately put on his head, and within a few months a force led by his cousin Taira no Sadamori, and Hidesato, defeated and killed him at the Battle of Kojima. Although he was a court bureaucrat, Hidesato had acquired a reputation as a calm, capable commander, and so much of the credit for curtailing the rebellion attached to him that he was subsequently given a formal assignment as “defender of the north” and governor of Shimotsuke Province.

Hidesato’s renown led to his being immortalised in the folk tale that gave him his nickname, Tawara Toda. In the fictionalised story Hidesato is a formidable warrior who slays a monstrous centipede. The centipede had been systematically dispatching members of the family of a dragon king, who enlisted Hidesato as the bravest warrior he had encountered. Hidesato realises that the otherwise invulnerable centipede has no tolerance for human spittle and so licks the tip of his final arrow before firing it into the creature’s skull.

As a reward the dragon gives Hidesato several magical gifts, including an inexhaustible bag of rice. Hence the nickname Tawara Toda, which translates as My Lord Bag of Rice. The story was eventually collected and written in two English versions, one by Yei Theodora Ozaki, who published it in The Japanese Fairy Book in 1903. It’s notable for its fantasy elements. Besides the dragon, which can transmute into human form, and the vast centipede with fiery eyes, there are dancing goldfish and musical red carp.