Visual Art: An exhibition from the De Pont museum in Amsterdam comes to Dublin 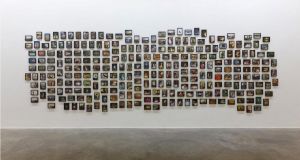 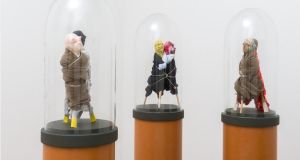 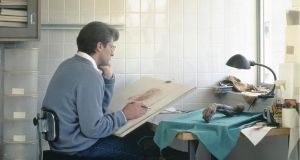 Jeff Wall, Adrian Walker, artist, drawing from a specimen in a laboratory in the Department of Anatomy at the University of British Columbia, Vancouver, 1992. Cibachrome transparency. Collection De Pont Museum, Tilburg (NL) 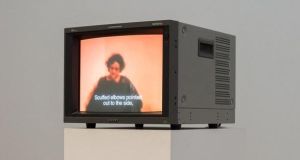 Starting in 2004, Fiona Tan began work on a series of portraits of places, Vox Populi. Tan, born in Indonesia and based in Amsterdam, is a consistently fascinating artist known for what might be termed her use of third-party imagery in her projects, be it archival film footage or, in the case of Vox Populi, people’s personal family photograph albums. Whether working in Norway, Japan or Australia, her methodology for Vox Populi was to obtain, via intermediaries, a collection of local family albums and trawl through them to arrive at what she judged to be a representative selection.

By their nature, family albums are both personal and generic: while the contexts are personal, the same occasions and moments tend to feature across the board, so that family snaps seem both oddly familiar and, at the same time, at one remove. Tan’s working process heightened this duality. She never met the subjects in person but came to know them vicariously as she immersed herself in their albums. Despite the rise of the smartphone as mobile family photographic archive, mostly the albums were physical books: Tan looked for printed colour photographs.

All of which applies to Vox Populi: London, completed in 2012 and currently the centrepiece of Face to Face at the Kerlin. It’s the centrepiece partly because of its imposing size. Its myriad black-framed images are spread out over an extensive tract of the main gallery wall, a sprawling expanse like London itself. Like the rest of the work in Face to Face, it is from the collection of the De Pont Museum, a collection carefully shaped by the director, Hendrik Driessen. From the museum’s 800-plus works, Driessen has selected 24 pieces by just 12 artists.

Only established in 1992, in the city of Tilburg in the Netherlands, in a reconfigured former wool-spinning mill, the museum is named after businessman and solicitor JH de Pont, who died in 1987. His will included provision for a foundation to encourage the development and appreciation of contemporary art. It’s a private museum, in other words, with a public mission and, while not exactly a minnow in the museum world, it does coexist with many institutional whales. Recognising that fact, the De Pont devised a distinctive acquisitions strategy. The idea is that it focuses on a relatively small number of artists and, among the pieces by each, at least one key work should feature.

In addition, Driessen aims to enrich and develop the dialogue between the works in the collection with each addition. It is, as he put it, “like weaving a web”. The human body, for example, is a recurrent theme, one that can be endlessly explored and elaborated, from sardonic self-appraisal in the greenish pallor of Marleen Dumas’s self-portrait, to Thomas Schütte’s allegorical miniature clay figures, Untitled (United Enemies), a bunch of individuals united and self-destructively interdependent in their mutual hatred.

The body, or a fragment thereof, is central to Jeff Wall’s lengthily titled 1992 photograph, Adrian Walker, artist, drawing from a specimen in a laboratory in the Department of Anatomy at the University of British Columbia, Vancouver. The specimen is a substantial part of a human arm, laid out on a table as the artist makes a precise drawing from it. Wall, himself Vancouver-based, is one of the leading photographic artists in the world, and this work is regarded as key. The photograph, displayed in a light box, has a luminous, hyper-real quality.

How real is it, though? From early on, Wall’s work has served to demonstrate that photographs are constructions. In fact, that’s only the start of it. We are looking at a staged scene. The man apparently drawing the specimen is Adrian Walker. He had, at some point in the past (when he was a student of Wall’s, in fact), made the drawing of that specimen in exactly that setting. We see the drawing at a re-imagined moment of completion. So Wall is reconstructing a moment in the life of Walker, as carefully as he can, with Walker’s co-operation. It is, he said, “near documentary”.  The work is a prime example in Michael Fried’s book on photography as art, centred on an elaboration of the opposed modes of absorption and theatricality in art, that he had introduced some years previously in his critique of Minimalism.

One day back in 2007, actor Samantha Morton posed for a nude portrait in Fiona Banner’s studio. Banner did not make a drawing or a painting, or take a photograph or a video – she wrote a description of Morton as she saw her, a blank verse description. No flattery, and some odd imagery, but compelling, and another fascinating example of Banner’s inventive, unorthodox use of text, which she has explored throughout her career. Her verbal portrait was, if you think about it, a brilliant idea. Shortly afterwards, she read the textual portrait of Morton she had written in public at the Whitechapel Gallery in London. She and Morton had agreed that the work would be concluded in this way. That is, again not documented or recorded. As it happened, film-maker David Reeve surreptitiously recorded Banner from his vantage point among the audience. It’s an unmissable part of Face to Face.

Not everything on view is a major work. In fact, some pieces are relatively slight, including those by Ai Weiwei, Cathy Wilkes and Giuseppe Penone – but that’s good for the rhythm of the exhibition.