Nathaniel Hone: A puzzle in the history of Irish art 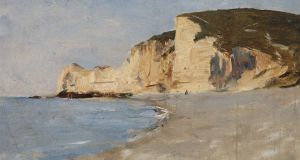 Nathaniel Hone the Younger, A View of Cliffs, Etretat, Oil on canvasPhotograph: National Gallery of Ireland

Modest in scale, occupying just one room, Nathaniel Hone: Travels of a Landscape Artist, shines a light on the largest single donation to the National Gallery of Ireland. One hundred years ago Hone’s widow, Magdalene, offered the contents of the artist’s studio – well over 500 works in oil and watercolour – to the gallery. Hone, who lived a long and productive life, was born in 1831 and died in 1917. He was, primarily, a landscape painter. While he travelled a great deal throughout his life, in Ireland and abroad, and spent many years based in France, the selection of work in this show is slightly weighted towards a lengthy Mediterranean tour he and Magdalene undertook in the early 1890s, visiting Venice, Corfu, Athens and Egypt.

In the history of Irish art, he is something of a puzzle. What’s puzzling is the slipperiness of his status. It’s as though he is taken for granted, but without any great consideration of his work. In a way, that’s always been so, even during his lifetime. In 1901, Sarah Purser was moved to organise an exhibition of work by two artists she regarded as being overlooked or underrate, Hone and John B Yeats. Hugh Lane, passing through Dublin, saw the exhibition and agreed with her to the extent that it catalysed his idea of establishing a municipal gallery of modern art. When that gallery opened, Hone gifted four of his paintings and Lane gave a further five.

Then, Hone’s work is, to put it mildly, quiet. He never ratchets up the pictorial drama. On the contrary, he seems to deliberately defuse any prospect of it. His substantial painting of Venice in the Hugh Lane may include a couple of gondolas, but La Serenissima, viewed along the Grand Canal presents a positively mundane profile. The composition resembles that of A View of Villefranche from the East in the current exhibition. A scene is often presented substantially in terms of expansive planes, to the extent that Hone can almost seem to approach abstraction – but of course, he never does.

His palette is characteristically muted, earth-hued, almost designed not to attract too much attention. While he does use tonal contrast to great effect, he generally likes to linger in the mid-tones. All of this perplexed some observers when he exhibited his work. They were not quite sure what to make of the many paintings of cows from his herd grazing or resting in the flat fields of North County Dublin: another quiet day in Malahide.

Hone was descended from a younger brother of the painter and Royal Academician Nathaniel Hone the Elder. Born into a prosperous, high-achieving family, he studied engineering in his teens, qualified, and worked on the construction of part of the Irish rail network before deciding to go to Paris and paint. If his initial artistic training in the ateliers seemed to indicate a traditional path (though he did befriend Manet), he soon found his own way, joining the realist landscape painters in Barbizon in the Forest of Fontainebleau and settling in among them – so much so that he stayed for many years. In Ireland from the early 1870s, he and Magdalene married, and settled in Malahide.

In Barbizon he learned how to paint outdoors, and he never gave that up. He returned to Ireland just a couple of years before the first Impressionist exhibition created a whole new world of ocular possibility and vibrant colour. Not that he felt he’d missed out on anything or that he was afraid of light. He was always attentive to light in his painting, but he was never an Impressionist, even though he was aware of the Impressionists. He was, though, artistically close to and personally friendly with Camille ‘papa’ Corot, a pioneer of plein air painting who the Impressionists greatly admired, for obvious reasons when you look at his paintings, and it is not too fanciful to cast Hone as Ireland’s Corot.

Hone was not financially dependent on his work, and lived a very comfortable life without the need to make a living (Magdalene, too, was from a well-off family, the Jamesons), which could be relevant to his relatively low profile. A glance at the plethora of labels indicating unknown dates and locations of the paintings on view in the exhibition confirm that, despite his engineering training, he did not run a businesslike studio in terms of organising, documenting and archiving his work and the details relating to it. He was aware that he treated his canvases carelessly, even roughly. That may all sound suitably bohemian and un-materialistic, but he should, perhaps, have employed an assistant to attend to that side of things. It’s not as if he was entirely indifferent to public perception. There is some evidence that he felt mildly aggrieved at the lack of response to his efforts.

There is no doubting his abilities and his commitment. The many fine paintings in the current show confirm his proficiency. And yet, and yet . . . one feels he did not fulfill his potential. Time and again there are hints of interesting developments, but they do not seem to lead anywhere. He doesn’t push the work onto a new level; he’s quite content in his comfort zone. It may be unfair to criticise him for not doing what, after all, the vast majority of artists don’t do, and he did produce a formidable body of agreeable paintings, but in the end there is that nagging sense of what might have been.

Marian Keyes: ‘What doesn’t kill us makes us funnier’
9 The SAS man who wouldn't stay quiet
10