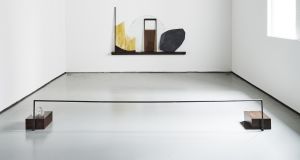 What is it? Untitled (barrier) and Shelf (2019) are sculptural works in a variety of media by Niamh O’Malley

How was it done? O’Malley has used a number of materials and processes, including steel, wood, glass (transparent and coloured), oil, graphite and wax. Pretty much every material is closely worked, especially in terms of the polished, burnished, shiny surfaces.

Where can I see it? The works feature in O’Malley’s exhibition at St Carthage Hall in Lismore, Co Waterford. Under the auspices of Lismore Castle Arts, the exhibition continues until August 25th, lismorecastlearts.ie

Is it a typical work by the artist? It is reasonably typical, although O’Malley is usually associated with the combination of sculptural objects and video. On the absence of a moving image component in this exhibition, the artist remarked that the setting contributed to the decision. The entrance to the hall is directly off the street, she pointed out, and the light, movement and noise of the outside environment provided the movement. It’s also true that she has become increasingly preoccupied with fixed, static pieces, and the process of moving people around them.

Not that she has forsaken the moving image. She has been working on a new film and, who knows, that may form part of her upcoming, major exhibition at the RHA’s capacious Gallery 1 (RHA, Ely Place, Dublin, September 6th-October 28th, rhagallery.ie).

O’Malley was born in Mayo and studied art in Belfast. Much of her subject matter fits under the umbrella of landscape, but environment may be a better term in relation to the sheer variety of locations. From the rural expanse of Co Mayo around Nephin to urban parks, commercial glasshouses to small suburban gardens, inland lakes to city streets, all have engaged her. What has been consistent are some evident tensions in her work, including that between what is fixed and concrete and the fleeting and mutable.

This active tension is important – she’s not just noting a dichotomy. The tension animates the work. It’s there in her early projections of video footage onto painted representations of the same location (The Dene “vignette”, 2004, for example). Equally she seems to be fascinated by glass, which for her encapsulates a curious duality. We see through it, it can frame a view, but it is also a physical material, a kind of solidified liquid. This is another, related tension involving transparency and opacity, the latter manifested as blackness (Island, 2010) or the phenomenon of a blind spot (Nephin, 2014).

These concerns are apparent in the St Carthage Hall works. Untitled (barrier), echoes the form of the dividing lines in museums and galleries that politely but firmly position the viewer. Often O’Malley’s sculptural pieces refer to framing and screening, and Shelf is a collection of such objects in a kind of still life, as though she is disassembling and rearranging the stuff of framing, representation and perception.