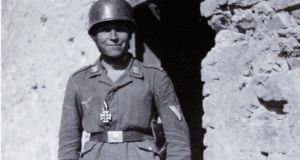 One day in the early 1990s, Steven Nestor bought two old copies of the Illustrated London News dating from 1944. They were filled with images and reports on the Battle of Monte Cassino. He wasn’t particularly familiar with the circumstances of the battle, but was “shocked and fascinated” by accounts of the ferocity of the fighting, the scale of destruction, and the numbers of people killed and extent to which they were injured.

At some point he decided that he would visit the area, not to trace the events of the battle, but to consider the landscape, and the people who inhabit it, in the light of his awareness of this terrible history. His book, Monte Cassino (Con Amore), just published by the photographic imprint T&G 75 years after the battle, is the result.

Nestor began putting the book together in 2013, self-publishing it first, and showing it at the Athens Photo Festival in 2017. Its initial title was A Natural History of Destruction, which is probably more indicative of his thought processes, and is retained as a subtitle in the short introductory text.

Time, memory, place and loss have been consistent preoccupations in his work since a project, which he started in his graduate year, No Tengo Más Que Darte. It consists of views of the sites in the seas around Ireland where “ships and lives were lost”, shot on distinctive Kodachrome film as it was phased out.

Around Cassino, he used a 1950s Vrede Box camera and high-grain film. The book incorporates some of these more recent images together with black-and-white wartime images. But the grainy colour of the recent photographs has the effect of pushing them back in time; they seem immediately distanced, as though we already perceive them from a future vantage point. Nestor quotes WG Sebald from Vertigo, as the narrator tries vainly to reconcile the view he is looking at with his knowledge of the battle that had taken place there. Sebald’s rueful, melancholy awareness that the present is underwritten and haunted by the invisible but undeniable past is thoroughly in keeping with Nestor’s concerns.

Perhaps the most widely known fact about the Battle of Monte Cassino is the destruction of the formidable Benedictine monastery that loomed over the town spread out on the plain below. As Nestor recounts, the most surprising thing about visiting the location today is the apparent absence of evidence that there was a hugely destructive battle there at all. The monastery was rebuilt in the postwar years and completed by 1964. The town had been pulverised and the plain was a cratered wilderness.

In fact, so great was the damage that a new town was created on freshly drained land while nature gradually reclaimed the ruins of the old. The book is a kind of visual essay developed in a layered, montage structure that juxtaposes then and now as a continuous, emergent pattern. Images of war alternate with details of the rather bland town Cassino is now, though there are signs of the past in the current images. Visitors loiter at a memorial; the remains of an ancient cellar are visible beneath a mantle of vegetation; people get on with their lives.Despite discrete memorials and war cemeteries, there is relatively little in the way of visual reminders. That is perhaps partly because, as Nestor puts it: “In Italy, the second World War is often treated as a national embarrassment.”

While on the whole the Allied forces, encompassing a bewildering range of nationalities, enjoyed good relations with the Italian civilian population, there was one exception. The Moroccan mountain troops under French command, known as Goumiers, were skilled guerilla fighters. They infiltrated German defences west of Monte Cassino and played a pivotal role in enabling the final, costly assault by Polish army units. But they also preyed relentlessly on the Italians and were notorious.

Besides, the destruction of the monastery still stirs strong feelings. Was it necessary? No. It was not a German defensive position but its ruins became a virtually impregnable redoubt. Its contents, including paintings, library and archive, not to mention the vast majority of the monks, had been evacuated by the German army, mostly to The Vatican. That may sound altruistic but was apparently not quite so: much wrangling was involved in the process and not everything ended up in Rome.

Although notified that German units were not stationed in the monastery, Allied commanders were unaware, as historian John Keegan wrote, that, remarkably, the local German corps commander was a lay member of the Benedictine order and had forbidden occupation of the monastery.

Finally, despite the immense, terrible human sacrifice involved, by the time the battle was concluded in May 1944, its significance was fast fading. The Normandy landings were looming. The US commander Mark Clark famously squandered the opportunity created to encircle the retreating German army, instead diverting his attention to being the first to arrive in Rome, by then already declared an open city and undefended. Clark was of course promoted for his vanity. In fact, any detailed account of the battle, its prologue and aftermath, all too vividly recalls Joseph Heller’s devastatingly satirical account of the lunacy of war and the military mindset in Catch 22.

Ben Wheatley: ‘Films can’t all be about people being bludgeoned to death’
8