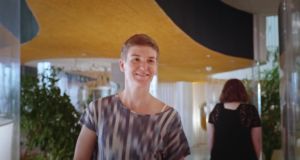 Pilvi Takala’s Temple Bar show features two of her works, The Stroker and an earlier piece, The Trainee. Both are performance videos with the artist herself as performer.

In both cases she infiltrates a specific social environment incognito, playing an assumed role and documenting reactions to her presence, which is calculatedly unsettling. This variant of Candid Camera is her signature method and has earned her, deservedly, a substantial international profile in the art world. It has also engendered an array of heavy-duty cultural theory responses in the art press, but don’t let that put you off. Her work is accessible and entertaining in the slightly uncomfortable way that Candid Camera stunts usually are.

Takala is Finnish and studied in Helsinki. However, in an interview with Art Monthly, she detailed how, in devising her artistic approach, she attaches particular importance to six months she spent at Glasgow School of Art on an exchange programme in 2004. There, for one week, she wore the uniform of students at a local school, an act of impersonation that sounds, as she was well aware, potentially disturbing.

It certainly disturbed her tutors (she failed her course) and Takala was so nervous about it (“It was horrifyingly scary”) she says she felt like throwing up. In time, in the form of a published diary titled Event on Garnethill, it became a benchmark work. It also typifies, she noted, how what she does is closely related to the sociological research method known as a “breaching experiment”. She points out that she is making fictional narratives, not doing sociology, but the sociological dimension is always there to some extent. Garnethill confirmed her “ability to resist social pressures and codes” and she has been honing that ability since. Rather than become increasingly outrageous, however, she has refined the art of subtle, slow-burning interventions.

The Trainee – earlier of the pieces in her Temple Bar show – was another benchmark for her, not least in terms of duration, as it required her to stay in character for an entire month.

Throughout that time she was a trainee in the marketing department of Deloitte in Helsinki. It comes across as – and who knows, perhaps on some level it is – an adaptation of Herman Melville’s celebrated story Bartleby, the Scriviner, about a clerk who quietly withdraws from his duties and, eventually, from life. The story has inspired a wealth of adaptations and derivations in different media.

Perhaps surprisingly, Deliotte sanctioned Takala’s project. Even so, she has tremendous nerve, insinuating herself into the corporate environment and then, Bartleby-like, declining to get involved. Deadpan, she sits passively at a desk without a computer or, for that matter, a pen and paper, doing “brain work” as she puts it to a puzzled interlocutor. Nor is she scrolling her smartphone. In the contemporary office environment of hyperconnectivity, her non-communicativeness and her refusal to appear busy amount to a form of sacrilege. Even more provocatively, she spends a day simply riding in the elevator, a pursuit that produces some amusing exchanges. One can sense the unease of the workers, even as politeness dictates they keep their inquiries within the tight cultural codes of office speak but less so in the inter-office emails her presence engendered.

It is evident from these that her otherness is more than a bit annoying as well as perplexing, with judgment calls on her idleness and even her mental wellbeing. There is a 10-year gap between The Trainee and the main piece in temple Bar, The Stroker, made in 2018. Takala was one of several performance artists invited to make a work in one of Second Home’s up-market co-working spaces in London. Such spaces draw on the Silicon Valley model of corporate culture, providing carefully designed, comprehensive boundary-blurring, creativity-encouraging environments, not just basic facilities. Takala’s ruse was to pose as a wellness consultant from Personnel Touch, introduced to Second Home to promote “the benefits of physical contact in the workplace”. Her procedure involves touching people on the shoulder as she encounters them and asking if they are okay. Responses vary, of course. Some people flinch, others respond in kind while several are puzzled.

In the context her presence seems plausible enough to Second Home’s inhabitants, though she does acquire a nickname: The Stroker. Of the two works, The Trainee is by far the better. The Stroker is more polished, slicker, more lavish in every way but, funnily enough, in it it’s hard to know where the boundaries are. The word re-enacted is used in an accompanying, explanatory text, without elaboration, but it jumps off the page. Amusing as it is, a great deal of what we see in the video seems carefully contrived, and skilfully so, but much more in the territory of fictional narrative than a “breaching experiment”.

In The Trainee, even given the involvement of Deloitte, Takala’s character cuts through the corporate texture like a scalpel. Her haunting, Bartlebyesque character has philosophical substance and a genuine edge of mystery.