The best visual arts shows to see this week 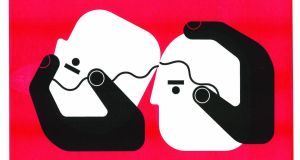 Civic Centre, Townhall, Belturbet, Co Cavan Until August 6th eilishmccann.com
Though based in Co Wexford, Eilish McCann is from Belturbet, and this show is on her home ground. Her paintings draw on photographic material, from personal and media sources. She is especially fascinated by the way formal social occasions of all kinds are revealing of the expectations, emotions and anxieties of those involved. At heart, she suggests, we are all to some degree alienated by society’s rules and structures. Her paintings are well observed, incisive and succinctly stated.

Triskel Arts Centre, Tobin St, Cork
Cork Printmakers are partnering with Triskel in an initiative that sees prints produced by members and guest artists available to view and purchase in the foyer. Editioned prints offer an affordable means of buying fine art. Based on Wandesford Quay in a refurbished warehouse, Cork Printmakers was established in 1991 and moved into its present home in 1999 and has a membership of more than 90 artists. Its director is Miguel Amado.

Up Close, and Far Away – Mariana Duarte Santos

Fenderesky Gallery, 31 North St, Belfast Until August 30th fendereskygallery.com
Renowned for the sweep and gusto of his bold allegorical compositions, Diarmuid Delargy has particularly excelled as a printmaker. Channelling the spirits of Goya and Picasso, he manages to apply key aspects of the Western classical tradition to the world around him in Northern Ireland. Performance art veteran Alastair MacLennan also has a natural graphic sense.

Signal Arts Centre, 1 Albert Avenue, Bray, Co Wicklow. August 6th-30th signalartscentre.ie
When Signal launched its open art exhibition it wasn’t clear that the event would become an annual fixture. By its nature, it is dependent on attracting enough of an entry. In fact, the underlying conviction that there is a lot of art out there in search of an audience has proved to be justified and the venue celebrates it’s seventh annual and will make a “Best in Show” award of €1,000 on August 9th.