The American’s art, on show in Kilkenny, evokes the rules that confine women’s lives 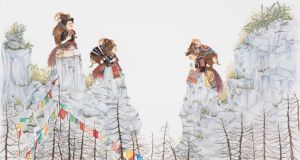 Amy Cutler: Above the Fjord (2010), at the Butler Gallery in Kilkenny

Amy Cutler is known primarily for her intricate gouache paintings and fine pencil drawings. Delivered in a gentle representational style that recalls children’s book illustrations or Indian Mogul miniatures, they tap into folk and fairy tales. But as you you look more closely, rather than embracing a reassuring fictional world of cosy, if usually patriarchal certainties, they undercut it. Despite glimpses of the ordinary and the mundane – such activities as laundering or spinning, for example – any obliquely implied narratives are difficult, even impossible to follow, as the scenes often exhibit a dreamlike illogicality.

This fragmentary, cryptic quality is strategic on Cutler’s part. She sets up narrative possibilities but refrains from spelling them out. Even though she draws partly on her own experiences and observations, she has said, she wants to invite us in without tying us to a predetermined meaning. Her arbitrary inventions need not, she feels, be readily intelligible. “It’s my world; I make the rules,” as she remarked in a Vice interview. No character seems to fulfill a predictable, conventional role, even as they are absorbed in their own obscure pursuits.

Almost all the characters we see in Culter’s work are female. It’s a woman’s world and, individually or in groups, women apply themselves to dealing with it, working purposively towards undefined common ends

Cutler, who was born in Poughkeepsie, in New York state, and is based in Brooklyn, studied at Cooper Union, graduating in 1997. During her time at Cooper Union, she took part in an exchange programme with the prestigious Städelschule in Frankfurt am Maine. The exceptionally liberal regime at the Städelschule is a particularly challenging environment for students, who are thrust into grappling with basic questions of motivation, purpose and meaning. Whether her spell at the Städelschule was decisive or not, once she’d graduated Cutler embarked on her career with exceptional focus and quickly established a presence in the art world.

It is immediately striking that almost all the characters we see in her work are female. It’s a woman’s world and, individually or in groups, women apply themselves to dealing with it, working purposively towards undefined common ends. They share their world with various animals, including goats, tigers, pigs and other hybrid creatures, but no human males. Sometimes there are echoes of outsider artist Henry Darger’s strange epic Story of the Vivian Girls, though his is essentially a mythic tale of conflict, and martial conflict at that, and Cutler’s is emphatically not.

Perhaps that also indicates a rationale for the absence of males in her work: to invite them in would be to make them, and relationships with them, a subject, and alter the dynamic of what she’s trying to do.

Physically, Cutler’s world resembles a distinctive fairytale realm, amalgamating a close, intimate domesticity and a vast, endless, mountainous woodland. Her characters are attired in colourful, even festive costumes that appear folksy but non-specific, performing tasks that are variously ordinary and fantastic. Her paintings include depictions of a headless woman (April), or a woman sitting holding her detached head on her lap (June), or a woman whose skull opens as though hinged to reveal the imaginative rooms within her head (in Molar Migration her teeth become headdresses, the inside of her skull home to an entire female community).

Such images, and others including one of women ironed flat, inevitably suggest violence, perhaps the violence that many women encounter. But in fact Cutler has been resistant to such an interpretation when pressed. The apparent violence is never gory or graphic, she points out, it’s more allegorical, or metaphorical.

Cutler’s goats, and the other animals she depicts, can be seen not so much as independent agents, more as indicative of the inner lives and qualities of her human protagonists

Indeed, given some of the extreme situations and imagery, the prevailing mood is curiously serene, as when, in Overcast, women lie sleeping on the grass while the washing that has presumably exhausted them hangs on a line next to the tubs of laundry water. It seems more plausible to interpret the images not as descriptive of events but as projections of inner states or speculations. As when, in another recurrent device, women’s bodies merge with inanimate objects in an Edward Scissorhands kind of way. That women are tied into myriad forms of never-ending labour is, however, a definite and consistent implication.

Memorably, in Above the Fjord, women bestride rocky pinnacles above leafless trees festooned with coloured bunting – or is it washing? All of which would be striking enough, but there is an additional detail: each woman carries, wrapped in a length of cloth as though it is a child, a goat. Cutler’s goats, and the other animals she depicts, can be seen not so much as independent agents, more as indicative of the inner lives and qualities of her human protagonists. Feral goats, for example, and even domesticated goats, are famously spirited, stubborn, agile and fierce, all characteristics that might be applied to Cutler’s indomitable women.

Her Idle Spinners, in a sculptural work, are a circle of seated women collectively manipulating a length of hair. She has previously envisaged a community of tree-dwelling women who go about their tasks with the aid of ropes braided from their own hair (and she collaborated with a hair stylist, Adriana Papaleo, who used human and synthetic hair to create hundreds of metres of braids for a sculptural installation). In that project, Cutler came closer than usual to implying a kind of female utopia. More often, her women come across as preoccupied or even indifferent, intently absorbed in the task to hand.

In some fairytales, notably Rapunzel, hair is charged with significance and magical properties. So it is hardly surprising that it has engaged Cutler, and several other artists, including Alice Maher and Vanessa Donoso Lopez, whose consummately detailed drawings and watercolours often address questions of gender and identity, and bear direct comparison with Cutler’s gouaches. In Cutler’s modern fairy tales, if one can so describe them, female solidarity does emerge as a constant, indeed an essence. At the same time, a certain rueful awareness of difficulty is apparent. Despite solidarity, the women we see are for the most part harnessed to roles and duties they do not necessarily choose. We are prompted to recognise the mores and rules that confine and contain women’s lives. And a vein of absurdity that recurrently surfaces in the work is surely indicative of an absurdity in those mores and rules.