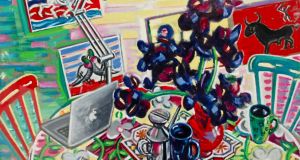 What is it?
Studio Scene with Still Life and Irises is a painting by Michael Cullen.

How was it done?
It was made with oil paint, confidently applied in gestural, often linear marks, mostly as body colour, wet-on-wet, rather than in transparent glazes. Cullen’s palette is, obviously, not naturalistic.

Is it a typical work by the artist?
It is typical. That is, it’s a bold, simplified, flattened, representational image rendered with a strong sense of pattern and design, a bright, even brash palette, and a certain playfulness. Typically, it also draws us into the artist’s life, situating the scene in his studio, with work in progress – or for reference or decoration – pinned to the walls, and the trappings of everyday life laid out on the table: tea or coffee, an open laptop, a pen resting on an open spiral-bound notebook, an Anglepoise lamp and a bunch of dark irises in a jug. As with most of Cullen’s painting, there is an attractive vitality to it, a sensual relish and enjoyment of the richness of things.

Cullen’s work has often and rightly been described as autobiographical. It is in that his life in the widest sense of his experiences, his relationships, his reading and listening, and what he is witness to has provided the theatrical substance for his painting. Theatrical because he is not a self-absorbed, self-obsessed narrator of his own egocentric story. Rather he is a wryly detached observer of the human comedy – in which he recognises that he too plays a part.

Generally his view is benign, though there are on occasion dark notes, notably during his time in Berlin, when he became interested in the idea of the malign, vindictive urban mob. On the other hand, the circus has provided a dominant allegorical setting in his painting, with a chimpanzee sometimes playing the role of the artist – a mischievous, libidinous presence against the disciplined routines of the well-schooled performers.

Irish mythology filled in for the circus in his 2018 exhibition Tír na nÓg at the Taylor, and he has also used an extensive, attentively observed range of classical and modern Western painting as references and models.  Born in Wicklow, having attended evening classes at NCAD for several years he became a full-time student, but then deferred his graduation to travel in Spain and Morocco. This experience transformed his work. Spain has retained a central importance for him, and he has spent a significant amount of time there working, as his 2011 Taylor exhibition Paintings from Sierra de las Nieves, Málaga, indicated.