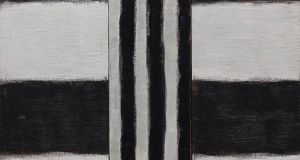 What is it? Inisheer is a painting by Sean Scully

How was it done? It was painted in a conventional way. Based on recordings of the artist at work, Scully tends to work quite quickly and intently, then spend considerable time looking at the work before applying himself to it again, and perhaps again, and so on. A finished painting can harbour very few to many layers of pigment.

Where can I see it? Inisheer is included in Shadowplay: Selected Works by Willie Doherty, Aleana Egan, Liam Gillick, Siobhán Hapaska, Callum Innes, William McKeown, Kathy Prendergast, Daniel Rios Rodriguez and Scully at the Kerlin Gallery, Anne’s Lane, South Anne St, Dublin, until August 28th, kerlingallery.com. But if you would like to immerse yourself further in Scully’s work, a visit to the Hugh Lane Gallery’s Sean Scully room is well worthwhile. He donated eight paintings to the gallery on Parnell Square in 2006 and another painting, Landline Grey, last year. The idea is that there is a space in Dublin where some of his work is always on view.

Is it a typical work by the artist? It is typical. While there is a great deal of change and development in Scully’s painting and printmaking (one could add photography, always closely related), he is undoubtedly best known as a painter of stripes. He has long employed the idea, as seen here, of placing a canvas within a canvas, a kind of window – or, in this case, island. Inisheer, in stark black and white, is quite austere given the artist’s careful but often luscious use of colour. That could partly be in response to its nominal subject, though it is entirely likely that the painting came first and the title later. In any case, the vertical accents set against the broad horizontal bands effectively convey the reality of the rocky island emerging from the vast ocean, and the hard nature of the island terrain.

Though born in Dublin, in 1945, Scully mainly grew up in London, studied art there and then moved on to New York in the mid-1970s. Somehow he did not bond with the UK, but he has retained a strong emotional attachment to Ireland (he has also spent considerable time in Spain and, especially, Germany). He has a noticeably high profile in Ireland, where, unlike writers and musicians, relatively few visual artists gain a place in the popular consciousness.

It probably helps that Scully’s paintings, while mostly abstract, are very direct and accessible. When you see one of his Wall of Light canvases, for example, not only will it stay in your mind, you will also recognise other of his works as his when you see them. He humanises minimalism, taking something that could be seen as remote and impersonal and imbuing it with emotion, warmth, and a sense of human frailty and fallibility.

On August 1st, a plaque was unveiled on the wall of the house in Inchicore that was the artist’s birthplace. The event was arranged by the Cuala Foundation, an artist-led organisation that works to strengthen the involvement of young people in cultural pursuits.