Why giving advice is not always the best thing to do 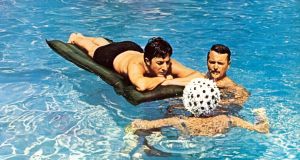 Think of the scene in the film The Graduate when Benjamin Braddock (Dustin Hoffman) finds his father’s friends lining up to tell him what to do: ‘There’s a great future in plastics. Think about it. Will you think about it?’ They see it as helpful. He does not

It’s advice season. The time of year when the older, allegedly wiser, dispense advice – whether it is wanted or not. These pearls are thrust onto graduates hunting for jobs or taking their first steps on the career ladder. In offices around the world, it is dealt out to those on work experience.

There’s something about the metaphorical ripping open of envelopes containing exam results that sends adults on a nostalgia trip. It’s a collective opportunity to think back on our youth – a time of fresh-faced promise, unencumbered by mortgages and responsibilities. Like Proust’s madeleines, but with more exams and less cake.

Career and exam advice is (mostly) well-meaning, in recognition that it’s hard for young people to know how to navigate the start of a career. Or, let’s face it, the middle, end and everywhere in between.

But advice is often not asked for. Think of the scene in the film The Graduate when Benjamin Braddock (Dustin Hoffman) finds his father’s friends lining up to tell him what to do: “There’s a great future in plastics. Think about it. Will you think about it?” They see it as helpful. He does not.

Worse, perhaps, is the unsolicited advice of strangers, usually on social media. This often ranges from humblebrags to straight-out brags. The exemplar is Jeremy Clarkson, the brash TV presenter, who every year boasts that his dismal A-level results did not stop him from acquiring a flash car/villa/superyacht. This year, he was joined by Virgin entrepreneur Richard Branson, who reflected: “At times like this, it’s more important than ever to remind yourself that exams aren’t the be all and end all. After all, the alphabet goes from A to Z not A to E!”

This from a man who has made great play of not following rules to the letter.

It can be hard to know what guidance to give. (Note to my own mother: “Don’t worry” and “just do what makes you happy” were not particularly helpful.)

The world of education and work changes. When you recount your professional greatest hits to someone half your age, describing scoring your first job from an ad in the Guardian, you’ll see bafflement across their face before they google “classified job ads”.

Much advice-giving is fuelled by the desire for an ego boost. You see yourself transformed into a great sage, with expertise and knowledge to impart. No one needs to know that you are winging it, making up your career as you go. I once mentored a 15-year-old girl in preparation for her GCSE exams. In passing, she asked me what grades I’d got. “Wow,” she said when I declared my competent, unwow-tastic GCSE grades. Yet despite myself, my chest puffed with pride at my decades-old achievement.

Such confidence boosts may even prove productive. In a study last year, Dear Abby: Should I Give Advice or Receive It?, researchers looked at people trying to save money, control their tempers, lose weight and seek employment. It found the most motivated were those who gave rather than received advice.

Robin Kowalski, a psychology professor at Clemson University, who has looked at advice-giving, says it can be a useful exercise. In a recent study, she found that about one-third of people think about the advice they would give to their younger selves every week, not just about education and work but also relationships.

For those who rarely do it, imparting advice to others is an opportunity to reflect on one’s own life. Imagined alternatives, she told me, might motivate us to overcome certain circumstances.

Egos can be pumped but also dashed. I remember a young woman whose face contorted with horror as I recounted my career. Her expression seemed to say: “Jesus, I hope I’m doing better when I’m as old as you.”

Giving advice may also trigger regret – as happened to a friend who delivered a careers talk at her old university. What was meant to be an inspiring experience plunged her into existential despair. A few moments before she was due to speak she had a full-blown panic attack over her life choices.