Tedious and outdated sexist jokes are sadly not outliers

Pilita Clark: The world has changed in ways that some men still don’t seem to understand 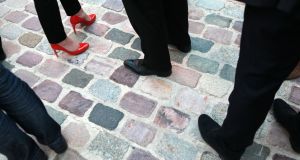 Damian Kestel committed a number of errors, the least of which is the joke itself. Yes, it smacks of tedious cliches about how men and women relate and yes, it suggests the sender thinks his audience is entirely male

One day last week, I was picking through the usual barrage of morning emails when I discovered someone had sent me an unusually interesting message.

It concerned CLSA, a Hong Kong-based brokerage that I have always been partial to because it was founded by two former journalists and produces punchy, readable research. In this case, one of its investment newsletters had been too readable.

Its author, Damian Kestel, had just sent clients a newsletter which included a joke that had offended so many people it had found its way to me. I normally approve of jokes. They are rare in the sea of timidity that drenches much of corporate life. This was more of a T-shirt slogan, a list of the “Five deadly terms used by a woman” that men supposedly need to decode.

“Nothing”, for example, “means ‘something’ and you need to be worried”. “Go ahead” is “a dare, not permission, don’t do it”. “It’s OK” means: “she is thinking long and hard on how and when you will pay for your mistake”.

Mr Kestel obviously thought it harmless, which it might have been had he confined it to a private email. I was not surprised to learn it had not gone down well in the City of London, nor the upper reaches of CLSA.

I tried to speak to Mr Kestel, who emailed to say he was at a conference and did not reply when I asked him about the joke. A CLSA spokeswoman was more forthcoming. The matter had been “escalated to management”, she said. “While CLSA is well known for its independent commentary on the equity markets, it in no way condones derogatory or biased commentary.”

Mr Kestel had been reprimanded and asked to immediately retract the “insensitive joke”. CLSA’s UK chief executive had spoken to clients and “apologised for the oversight”.

It seems to me that Mr Kestel committed a number of errors, the least of which is the joke itself. Yes, it smacks of tedious cliches about how men and women relate and yes, it suggests the sender thinks his audience is entirely male.

But what makes it all the more striking is that it was sent out by someone who is supposed to be across global events. You do not need to have followed every twist in the downfall of Harvey Weinstein or Uber’s Travis Kalanick to know that in 2019, sensitivity to corporate sexism has entered an entirely new phase in much of the world.

Are things that different in Asian financial centres? I’m sometimes told they are. A colleague says he thinks there is a substantial rump of “stranded assets” in Asia, by which he means middle-aged expats from Britain, Australia and the US who are agog at over-sensitivity gone mad in London and New York.

If that is true, I suspect some will be putting Mr Kestel’s case in the same basket as that of Paul Donovan, a top economist at UBS. He was put on leave this year after a Chinese financial outfit suspended business with the Swiss bank because of remarks he made about a swine flu outbreak in China. But the two cases are quite different.

Mr Donovan was trying to explain why the outbreak should not worry investors concerned about international inflation when he haplessly said: “Does this matter? It matters if you are a Chinese pig. It matters if you like eating pork in China. It does not really matter to the rest of the world.”

That sparked a storm on Chinese social media, where Mr Donovan’s phrase “Chinese pig” was taken to mean people not porkers. An English speaker could see this was a misinterpretation.

There are no mistranslation excuses for CLSA’s Mr Kestel, whose case has emerged in the same week that yet another female banker in London won a gender discrimination case. Stacey Macken alleged she was paid hundreds of thousands of pounds less than a male peer while working at French bank, BNP Paribas, where she also claimed a witch’s hat had been left on her desk and a boss routinely belittled her by saying “not now, Stacey”.

That underlines why Mr Kestel’s joke managed to offend women of all ages: older ones because it reminded them of a time they thought had passed. Younger ones because it suggested it has not. – Copyright The Financial Times Limited 2019