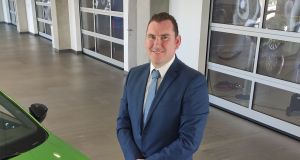 Dave Rave: I’m highly motivated about solving issues and challenging the status quo. I’m not ready to smoke a pipe and wear slippers

One of the big advantages of living in the heart of Europe is not having to get on a plane to go on holidays. Another is having the whole range of winter sports on your doorstep and a third is the good work-life balance that Dubliner David Rave has enjoyed since moving to the Czech Republic in 2017 to work for Skoda.

“The majority of people here really take care to maximise the life side of the work-life balance,” he says. “Hours are flexible and they like to start their day early – from 6am – and finish shortly after 2pm. Quite often most people around me would be gone by three in the afternoon.

“It is also very family-orientated, which suits us as we have three children. We were a bit apprehensive about moving as we didn’t know what to expect and how it would feel being away from friends and family. But in the end, everything was fine. It was easy enough to settle, as the children were young enough not to be too attached to our Irish life.”

Rave moved to the Czech Republic to manage the aftersales marketing unit. It supports three areas globally: accessories assortment for each model, parts and accessories lifecycle management; and marketing communication for parts, accessories and service.

Rave is based close to the Skoda plant at Mlada Boleslav, which is about an hour’s commute from Prague where he lives. His children go to an international school which encourages active participation by parents and his wife, Siobháin, volunteers there.

Rave’s career is the story of a young teenager so determined to work with cars that he left school after his Junior Cert to become a motor apprentice.

As part of his training he attended DIT Bolton Street where he was blown away by the quality of the teaching. “I was lucky to learn from some really inspiring lecturers like James Long and Declan Allen, who encouraged me to continue studying,” Rave says. “Including my apprenticeship, I spent about 15 years going to college mostly in the evenings.

“As my job began to change and move from a technical role to more of a management role, I started studying business and completed a commerce degree in 2014 to add to my degree in automotive engineering and other technical qualifications.”

Rave had started his working life as an HGV technician. He then moved into a diagnostics role with Mercedes Benz before joining the VW group in 2008 as a product support engineer. He was appointed national service manager in 2012 and two years later was promoted to head of aftersales with Skoda Ireland.

In 2017, Rave was asked if he was open in principle to a move overseas to the parent company. Recognising it as a huge opportunity he agreed and in November of that year he relocated to the Czech Republic.

“I had gone as high as I could in aftersales with Skoda in Ireland and, having spent all of my career working with dealers and importers, I was keen to experience the motor industry from the manufacturers’ perspective,” Rave says. “I’m passionate about the brand and the (VW) Group and learning new things so it was very appealing to get to work for the manufacturer.

“On the personal side, my wife fully supported the idea of moving abroad, meeting new people and experiencing a different culture.”

Rave says the single biggest thing that’s struck him since moving is scale. “When you’re working in a market, you’re exposed to a very small part of what is an absolutely huge organisation with so many moving parts that you never see. For example, locally you’re dealing with the end product whereas here you’re part of a planning process that begins about five years before the next model even reaches the market and people are already thinking about systems and components and so on. There are just so many people involved and you’d never get a sense of that just working in Ireland.

“In the time I’ve been here I’ve learned a lot about how business is done at manufacturing level – the structures, processes, compliance, quality and so on – and it’s been fantastic. I love it. I’m also getting experience of managing and working with a diverse team who come from many backgrounds. This creates different opinion and perspectives and is really interesting.”

While Rave finds the Czech Republic an attractive place to live because of its beauty and climate, he says the average national wage of around €12,000 would probably put most Irish people off going to work there.

“You’d need a skillset that is in high demand and to be working for an international company as the salaries would be better,” he says. “Most Irish people we know here are working in IT and I think there are many opportunities if the company is international and wants to hire native English speakers,” he says.

“I believe that any Irish person who is willing to go above and beyond to deliver company objectives will always succeed abroad.”

Asked about his own career progression plans, Rave says: “I consider myself to be a bit of a fixer. I’m highly motivated about solving issues and challenging the status quo. I’m not ready to smoke a pipe and wear slippers.

“If I believe I can add value then I’m in. I’m already talking with my company about where I will go next. At this moment, it looks like my skillsets are desired somewhere else (abroad) within the organisation and it’s going to be extremely challenging... but I can’t say any more right now!”