Unaffordable apartments, fluffy TV and how to reduce your tax bill this year 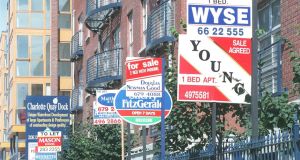 A report published this morning shows the number of residential properties sold in 2020 was down over 21 per cent.

The cost of delivering a two-bed apartment in Dublin ranges from €359,000 for a low-rise unit in the suburbs to as much as ¤619,000 for a high-rise unit in the city centre, according to a report from the Society of Chartered Surveyors Ireland published today, with the “bricks and mortar” element of construction accounting for less than half of the overall cost. Eoin Burke-Kennedy reports, while Cantillon ponders why Ireland has such a problem delivering apartments at affordable rates.

Another new report published this morning shows the number of residential properties sold in 2020 was down over 21 per cent compared to the previous year, but prices held firm. Colin Gleeson has more details.

In commercial property news, Ronald Quinlan reports that developer Johnny Ronan’s Ronan Group Real Estate and US investment firm Colony Capital are understood to have agreed the sale of “a majority interest” in the European headquarter offices they are developing for Facebook and Salesforce in Dublin to an international investor for a figure in excess of €1 billion.

The European Union issued a warning to AstraZeneca yesterday that it expects all vaccine deliveries to continue according to an agreed delivery schedule after the pharmaceutical company announced delays. Minister for Health Stephen Donnelly said last night that he expected deliveries to Ireland oto be “at the lower end” of expectations for February and “considerably lower” for March. Meanwhile, AstraZeneca described German media reports saying its vaccine was shown to have a very low efficacy in the elderly as “completely incorrect”. Cantillon asks, why has the company made such a mess of things?

With so much doom and gloom in real life these days, it’s no wonder Netflix’s 2020 hits – Bridgerton, Emily in Paris, season four of The Crown – have been fluffy and untaxing, writes Laura Slattery in her Media & Marketing column today.

In Personal Finance, Fiona Reddan explores how you can reduce your tax bill in 2021, while Dominic Coyle advises one of a number of readers who have been in touch with queries since Revenue issued preliminary statements of liability to thousands of workers last week whose employers availed of the Temporary Wage Subsidy Scheme last year.

6 Ireland’s need to balance the budget books has not gone away, you know