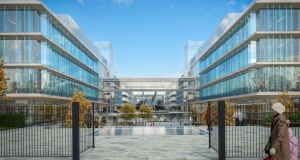 Developer Johnny Ronan’s Ronan Group Real Estate (RGRE) and US investment firm Colony Capital are understood to have agreed the sale of “a majority interest” in the European headquarter offices they are developing for Facebook and Salesforce in Dublin to an international investor for a figure in excess of €1 billion.

While RGRE declined to comment on the matter, the as-yet-unidentified party is understood to be a new entrant to the Irish market. The investor was selected following a targeted process directed by Eastdil Secured, in which it offered prospective purchasers the opportunity to enter into a “joint venture opportunity” on the two Dublin schemes.

In the case of the Facebook development, potential suitors were offered the opportunity to secure ownership of a majority stake in Fibonacci Square in Ballsbridge, Dublin 4.

The scheme, which is fully let to Facebook on a 25-year lease commencing in 2022, forms part of the social media giant’s wider European headquarter campus comprising 80,825sq m (870,000sq ft) of office space.

Facebook’s decision to take out a 25-year lease on Fibonacci Square office development represented the largest single office letting in the history of the State.

Facebook’s new Dublin campus is set to be its second-largest campus globally, outsized only by its global headquarters at Menlo Park in California. More than 60 Facebook teams will eventually be located in Ballsbridge.

It will also be home to staff working for its subsidiary applications, WhatsApp, Instagram and Messenger, and its Oculus virtual reality unit.

In the case of the Salesforce scheme, potential purchasers were offered the opportunity to secure a majority interest in the global tech giant’s new European headquarters and a 204-bedroom hotel leased to the Dalata Hotel Group Plc on a “35-year term-certain” lease , which is under construction at Spencer Place in Dublin’s north docklands.

While Salesforce has already committed to renting 100 per cent of the 39,950sq m (430,000sq ft) of the office space for which planning permission has been granted, that footprint could potentially grow to 49,240sq m (530,000sq ft) should RGRE secure approval from Dublin City Council to increase the permitted height of Salesforce Tower from nine to 13 storeys.

Spencer Place will serve as Salesforce’s new European headquarters with a 15-year lease set to commence in March.